Lunar New Year in the age of Covid-19

AS he entered Hong Kong Supermarket, Sam Lin scanned text messages from his wife instructing him how many red envelopes to buy.

Three dozen, she wrote — and make them large, to fit checks rather than folded wads of cash.

Lin’s nephews, nieces and in-laws would not have the thrill of pulling crisp bills out of their red Lunar New Year good luck envelopes when the Year of the Ox began.

Normally, Lin would go to his credit union weeks ahead of the holiday to pre-order new bills — a total of US$900 to US$1,000 for the kids and elders in his extended family. But with the possibility that the coronavirus could be lurking on US$20 or US$100 bills, Lin is one of many Asian Americans forgoing traditional cash to ring in the festivities.

The pandemic, which has claimed the lives of more than 44,000 people in California alone, has altered age-old customs, as it has so much else. Many families would not be getting together over lavish spreads that may include dumplings, sticky rice cakes, whole fish, spring rolls or longevity noodles.

This year, red envelopes, often emblazoned with well wishes in Chinese characters or fortuitous symbols like peaches and fish, may contain checks or candy instead of cash. Some people have sent money through online services to avoid touching anything.

Others have opted for virtual envelopes — a marriage of e-cards and Venmo — which would erupt in a riot of colors and New Year’s greetings while allowing the recipient to redeem money.

Family members who receive red envelopes are generally those who need to be taken care of or thanked, including kids, parents and grandparents. Some Asian Americans also give red envelopes to hairdressers, neighbours, mail carriers and mechanics.

“I think we all have to think of ideas this season, ” said Lin, a Monterey Park businessman in his late 50s who was born in Taiwan.

In Irvine, Kat Nguyen-De Angelis has been ultracareful about the coronavirus. Besides her husband and four-year-old son, no one else has set foot in her condominium since the pandemic started.

She gets her groceries delivered. Standing in a long line to ask a bank teller for a large amount of cash, even when double-masked, is not a risk she wanted to take.

But doling out money to family members across generations is not optional. The turning of the calendar is a time of generosity, renewal and setting off on the right foot by shying from arguments.

“Of course, the kids prefer seeing — and counting — real money. That’s the highlight, ” said Nguyen-De Angelis, 42, a public relations consultant who is Vietnamese American. “But what about all the germs?”

Her solution: tucking fish sauce caramels she discovered on the Internet into shiny red and gold envelopes, along with Lotto scratchers for adults. Youngsters would still get a few bills, to have the excitement of pulling out real money. She would drop some envelopes off in person and mail others.

Virtual red envelopes were already a trend before the pandemic. Like working from home, they are a technology-driven convenience accelerated by the necessities of the past year.

“They’re fast, they’re convenient and you can make it into a game, ” said Bill Imada, chairman of IW Group, a global advertising and communications agency with expertise in the Asian and Asian American markets.

Billions of dollars have been exchanged through the online holiday gifts since the trend took hold around 2015 through the WeChat app, Imada said, with features such as competitions among friends spurring participation.

“People send love notes. They make their own designs, or they direct it to members of a group, and whoever opens it up first in the group gets more money, ” he said.

Imada’s colleague, Flora Zhao, has sent digital red envelopes to more than 20 people in her circle in California, China, Massachusetts and New York, avoiding the lag time of physical mail.

“Since they receive it right away, you never worry about being late, ” said Zhao, vice president of client partners, who is Chinese American.

The Lunar New Year is a big marketing opportunity for Asian-oriented companies. While watching the Chinese channel CCTV’s New Year’s extravaganza, which attracts more than a billion viewers, Zhao posted red envelopes on her WeChat Moments, with friends vying to be the first to open them and collect the money.

Stevie Dai, a high school student from Alhambra, expects to receive at least $250 total from relatives in Singapore, who have said they would transmit the envelopes — hongbao in Mandarin, li xi in Vietnamese — via the internet.

“It’s safer, yeah, because it’s true that you can catch COVID from any old or new money, just like you can catch it from any family member, ” said Dai, 17. “The point is to avoid contact.”

Banks around the world have adjusted their cash practices, with less foot traffic from customers and a slowdown in the number of bills circulating.

At United Business Bank in Garden Grove, which has many Asian American customers, the usual holiday rush for cash has trickled to “two or three calls, ” said First Vice President Ngoc Tinh Nguyen.

In a normal year, if the phone rang before Tet — the Vietnamese term for Lunar New Year — it was likely someone asking for the freshest bills possible. If a request for US$2,000 or US$5,000 was not fulfilled, the customer would be very upset, Nguyen added.

By November or December, the bank is usually receiving shipments of extra cash, including US$2 bills, which are popular for red envelopes.

“It’s so sad we can’t celebrate in person, ” Nguyen said. “But let’s be safe first.”

The District, an outdoor shopping center in Tustin, typically offers dollar bills in whimsically decorated envelopes for the new year. The mall’s usual celebrations, complete with a lion dance, have been cancelled to avoid attracting crowds. This year, instead of cash, consumers who spend US$100 or more get red envelopes with gift cards from mall stores.

“We tried to think of ways we can keep traditions alive while still social distancing, ” said Shannon Campbell, marketing director for The District.

Janet Li, 59, a saleswoman from San Gabriel who was born in Taiwan, usually gives her parents and in-laws US$100 each for the new year. She has a slew of nieces and nephews who get red envelopes too.

Opening an envelope to find a check doesn’t have much appeal to a seven-year-old, Li said — and then the check still needs to be deposited by the parents. She has asked her college-age son to research the online envelopes and may include cards for gas — still a pandemic necessity — as well.

Staying apart during this important holiday, as well as minimising the touching of cash and even the colorful envelopes themselves, will ensure that family and friends can celebrate together next year.

“You can stop this superspreader, ” Li said. — Los Angeles Times/TNS 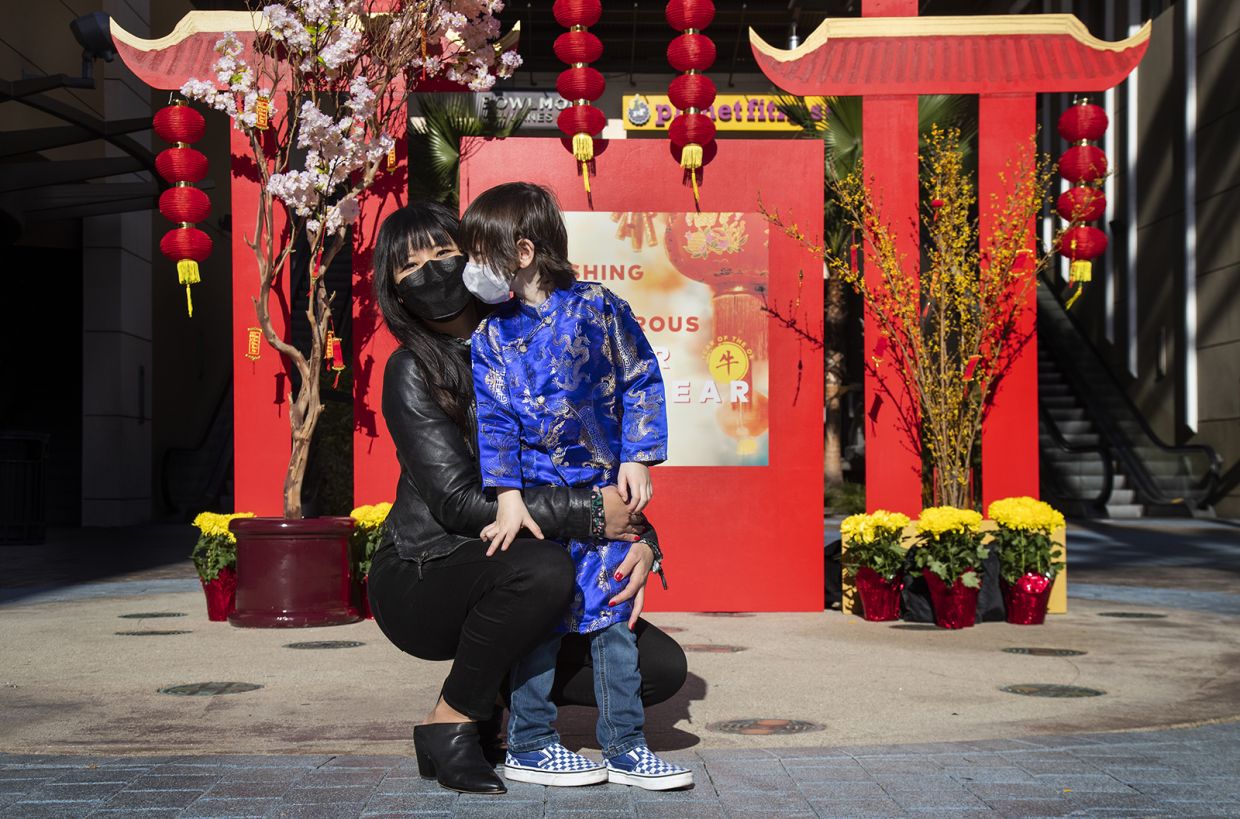 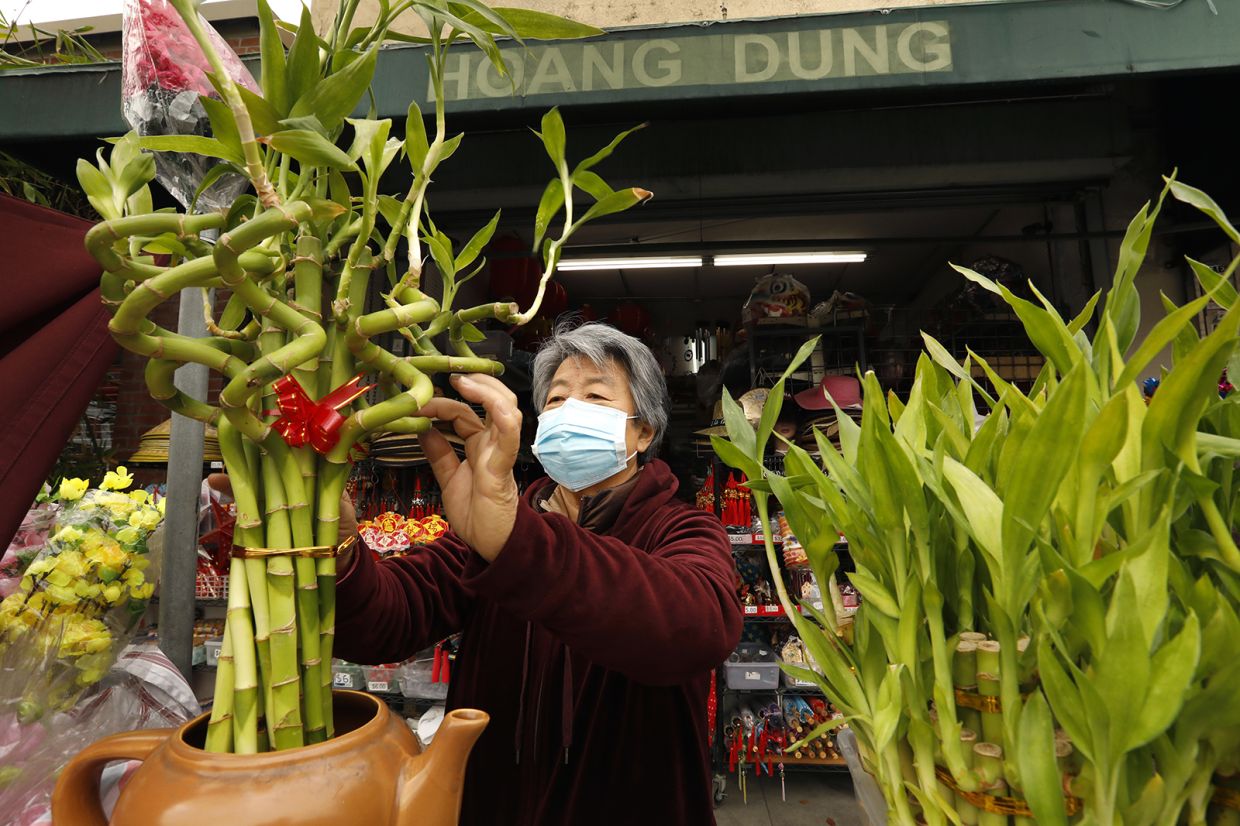 Kat Nguyen-De Angelis, with her son Dominic, at the pagoda photo display under a sea of red lanterns at the Union Market which is decorated for the Lunar New Year in Tustin. — Los Angeles Times/TNS

Wearing a dragon dance costume head, Midori Nguyen, 5, performs the dragon dance in the isle during a shopping trip with grandma in preparation for the Lunar New Year at the Asian Garden Mall in Little Saigon. — Los Angeles Times/TNS