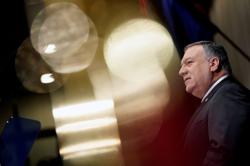 This is not the first time, however, the hawkish US diplomat claimed that Iran was forming an axis of evil with Al Qaeda. And just like back then, Pompeo can't back these claims with evidence. — AFP

A maximum pressure campaign against the Biden administration?

A DESPERATE Mike Pompeo unconvincingly claiming,"Al-Qaeda has a new home base. It is the Islamic Republic of Iran," in a recent speech at the US National Press Club, looks like a frantic last-ditch attempt by the outgoing US administration to further botch up US's relations with the Islamic Republic of Iran. And the fact that the US Secretary of State could not substantiate the claims only reveal their hollow, fickle base.

This is not the first time, however, the hawkish US diplomat claimed that Iran was forming an axis of evil with Al Qaeda. These last few years, Pompeo has been propagating strong, but unsubstantiated anti-Iran narratives while driving the Trump administration's "Israel First" Middle East policy.

Even in April 2019 – nearly 11 months after the US unilaterally pulled out of a multilateral landmark nuclear deal with Iran to curb its nuclear ambitions – Pompeo, during testimony before the Senate Foreign Relations Committee, claimed that, "There is no doubt there is a connection between the Islamic Republic of Iran and al-Qaeda. Period. Full stop. The factual question with respect to Iran's connections to al Qaeda is very real. They have hosted al Qaeda. They have permitted al-Qaeda to transit their country." And just like now, back then Pompeo couldn't back these claims with evidence.

In reaction to Pompeo's 2019 statement, a senior US official closely monitoring Iran said, "The Secretary has blown the level of collusion between Iran and a few of the remnants of al Qaeda way out of proportion. There have been occasional marriages of convenience, but there is nothing in the intelligence to suggest that any of them has been consummated in any grand anti-American alliance."

While there have been instances where some Al Qaeda members have crossed into Iran since the 2001 US strikes, thanks partly to the porous border Iran and Afghanistan share, and have been living in Iran, at times under "house arrest", as suggested by Daniel Benjamin, Obama Administration's State Department top counter-terrorism official, there has been no evidence that Iran has colluded with Al Qaeda.

And there could be a number of reasons why Iran has allowed the Al Qaeda members to stay in the country. One reason could perhaps be to hold them hostage to have an upper hand in negotiation with the US or other hostile foreign or regional powers.

Another reason could be to make sure that Al Qaeda does not carry out any attacks against Iran or Iranian interests inside or outside the country.

"The Iranians want to know what AQ is up to and they keep close tabs on them, but Iran's current approach and one it's maintained for many years has been to avoid anything that would provoke an American strike," Daniel Benjamin was quoted by TIME.

But the question remains, with less than two weeks in the White House, is Pompeo's exaggerated and forced claims about Iran colluding with Al Qeada only aimed at further straining the relationship between the Iran and the US? Or is there a more sinister motivation behind it?

According to the 2001 Authorisation of Use of Military Force (AUMF), the US forces are allowed to strike on Al Qaeda anywhere in the world, and this means that the US can carry out attacks in Iran, if the country shelters Al Qaeda. The AUMP authorises the president to use force "against those nations, organisations, or persons he determines planned, authorised, committed, or aided the terrorist attacks that occurred on September 11,2001, or harboured such organisations or persons."

Pompeo's claim would potentially allow the warmongering US to go against a US Congress resolution passed last year that state the president would require authorisation from Congress before attacking Iran.

This resolution was passed by the US Congress in the wake of the unlawful and reckless assassination of top Iranian general, Qassem Soleimani, who was the head of Iran's elite Islamic Revolutionary Guard Corps' (IRGC) Quds Force, and had been instrumental in the defeat of ISIS in Syria and Iran – a fact often downplayed by the western media. In fact, it was Soleimani who officially declared the defeat of IS in Syria and Iraq through a letter to Iranian Supreme Leader, Sayyid Ali Hosseini Khamenei in November 2017.

Trump vetoed the Congress resolution in May 2020.

Talking to the German broadcaster Deutsche Welle, Trita Parsi, executive vice president of the Quincy Institute think tank, rightly expressed the concern that Pompeo's statement has created a "casus belli that would allow the administration to go and attack Iran in its last couple of days in power."

Pompeo's assertion can have dangerous and ever disastrous consequences for the US and the Middle East.

Dangerous for the Middle East because this could push the already volatile region on the brink of massive destruction – any war with Iran would potentially embroil the entire region in an uncontrollable mayhem.

And disastrous for the US and also Israel because this would also essentially hamper the Trump administration's initiative to force Arab nations to "normalise" ties with Israel.

However, Pompeo's unverified last-minute claim,"I would say Iran is indeed the new Afghanistan – as the key geographic hub for al-Qaeda – but it's actually worse" seems more directed at sabotaging the US-Iran relationship, since the Biden administration salvaging ties with Iran, or going back to the Joint Comprehensive Plan of Action (JCPOA), also known as the Iran Nuclear Deal, would be a blow to the ego and reputation of the outgoing administration, and would not serve their "Israel First" Middle East policy.

One must also keep in mind that the hard-line ideological oppositions between the Shiite Islam based clerical state of Iran and the stanchly Sunni terrorist outfit Al Qaeda, whose religious sentiments are more aligned with the Saudis – one of Iran's greatest regional foes – make any alliance between the two almost impossible.

And Iran had in the past detained and deported members of Al Qaeda who had crossed the border and entered Iran, as claimed in 2018 by foreign ministry spokesman Bahram Ghasemi.

And there have been records of Iran siding against the Al Qaeda even before 9/11. A Foreign Policy report suggests that before September 2011, Iran had backed US allies, Northern Alliance Afghan guerrillas who were active against the Taliban, hosts of Al Qaeda.

And post 9/11, Iran has been reported to have placed under house arrest several Al Qaeda members who had made it to the country. In light of the decades of animosity and seemingly irreconcilable ideological differences between Iran and Al Qaeda, Pompeo's claims ring hollow to say the least.

To sum it up, the Trump administration seems fully bent on making sure the Biden administration does not get much room to resolve the disputes with Iran, as this would mean a reversal of the mess Trump and company has made in the region and would go against their agenda of putting Israel first.

And to this end, the outgoing administration is running a "maximum pressure" campaign against Biden and his cabinet, through their unfounded rhetoric.

How much of this pressure the Biden administration will be able to handle, only time will tell. — The Daily Star/ANN 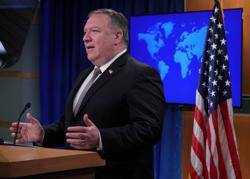