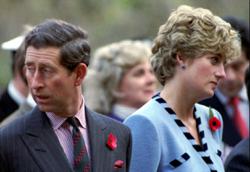 No happy ending: Hit drama ‘The Crown’ has run into controversy over its depiction of the breakdown of the ‘fairy tale’ Charles-Diana marriage. — Reuters

THE runaway multi-season hit drama The Crown, a fictionalised account of the travails and triumphs of the British royal family over the past 70 years, currently airing its fourth season on a major OTT platform, has run into controversy over its depiction of the breakdown of the “fairy tale” Charles-Diana marriage.

The British media is awash with reports that Prince Charles, the heir to the throne, is trying to get Season 4 – which portrays in granular detail the troubled and ultimately tragic end of his union with Diana – supressed. Charles is apparently deeply upset at the less-than-flattering, some feel vicious, approach of the show in delineating his character and in the apportioning of blame for Diana’s troubles which ultimately led to her death in a Paris car crash in 1997.

That this brouhaha over a reel-life controversy comes simultaneously with a row over the real-life, famously “last-straw interview” given by Princess Diana to the BBC’s Martin Bashir which the journalist has been accused of using fake bank statements and other misrepresentations to procure, is further grist to the mill. Additionally, the second-in-line to the British throne, Charles’ and Diana’s elder son Prince William, has come out in support of the inquiry into the facts, circumstances and methods used by the broadcaster and its representative to gain access to Diana.

The cult of celebrity has been with us since time immemorial. So, it is only to be expected that one of the biggest scandals of the late 20th century is resurrected in an age of global celebrity obsession feeding off social media frenzy. It’s the business model.

But apart from an aesthetic disdain many may have for the intrusion – in Diana’s case, invited largely by herself– into what was essentially a private matter and its presumably traumatic repercussions on the adults and children involved dressed up as concern for the Constitutional scheme of things, the row is a telling commentary on our collective obsession with the culture of blame. Everything must be somebody else’s fault, ideally the person one disagrees with and/or dislikes.

Yet, it would not do to make sweeping generalisations about the whole affair. Deconstructed to its parts, the BBC inquiry, headed by the Master of the Rolls, the second most senior judge in England and Wales till he retired in 2016, could be an important investigation into media ethics.

And the prima facie slanderous portrayal of Prince Charles in The Crown may set a legal precedent for the limits of artistic licence in the depiction of real-life characters if he takes the makers of the show to court. The rest is all noise. After all, The Crown is fiction, not history. – The Statesman/ANN