THE dust has settled on the case of Veveonah Mosibin – the 18-year-old student from Sabah who climbed a tree to get better Internet coverage to take her online examinations.

But the work has just begun to address bigger, underlying issues: the need to boost Internet connectivity and close the digital gap between rural and urban areas.

This is especially if Malaysia wants to embrace the era of 5G in the future.

The fifth-generation rollout was targeted for this year, but now, it is expected to be ready by 2022 at its earliest, say reports.

At this stage, the Malaysian Communications and Multimedia Commission (MCMC) admits it still receives many complaints about connectivity in the country.

Fortunately though, steps are underway to make things better.

By this year, 940 new cell sites will be built in urban and suburban areas nationwide – a move that will boost quality and indoor coverage.

“There are also plans to set up 1,661 new sites across Malaysia to extend mobile 4G coverage in rural and remote places by 2022,” says MCMC, adding that this is part of the Jalinan Digital Negara or Jendela initiative.

“The movement control order period has shown that there is still a lot that needs to be done to improve coverage and quality of service, and to prepare for the new norm going forward,” it says. 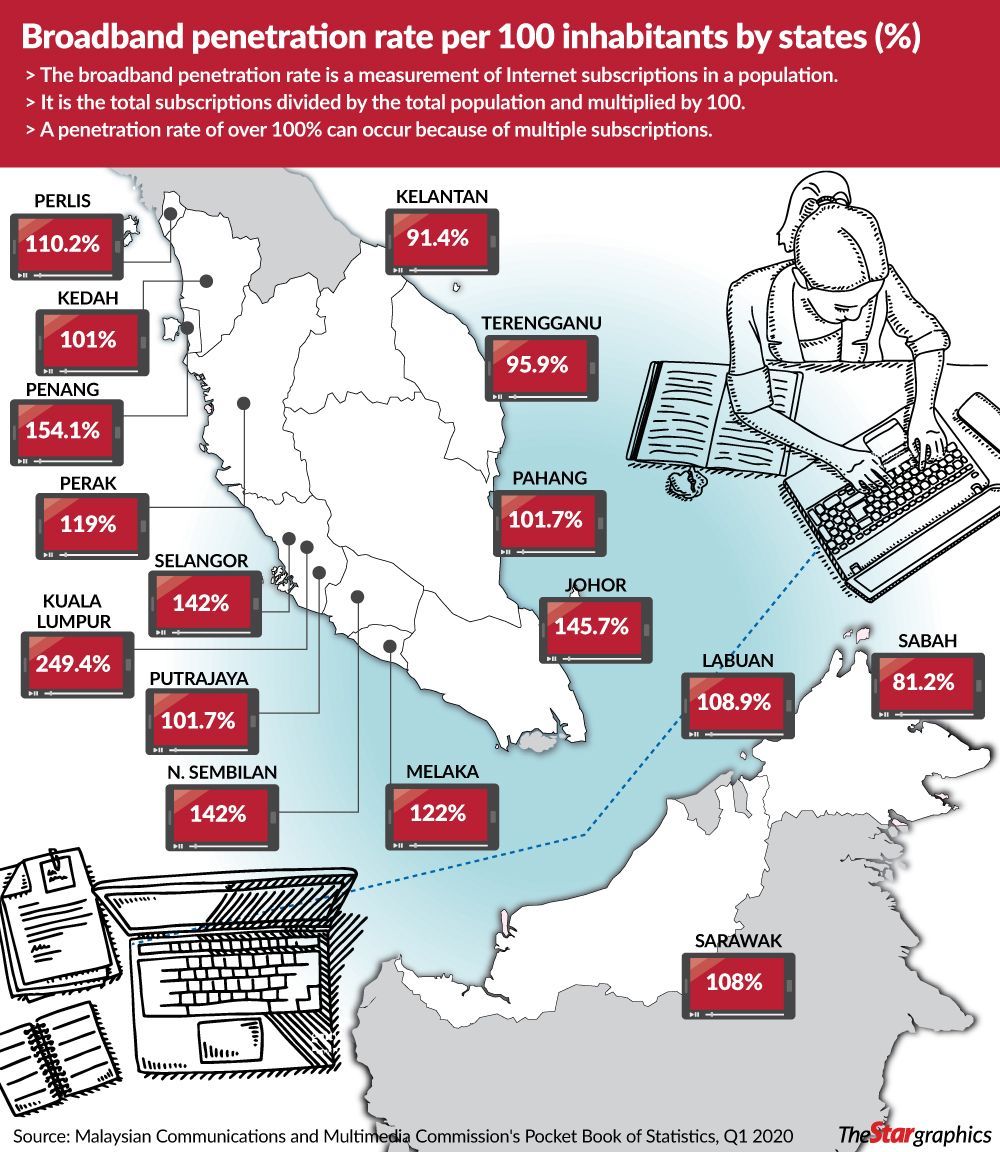 Hence, the MCMC’s immediate task now is to renew focus on strengthening the infrastructure.

“This includes expanding fibre rollout especially to towers, and upgrading equipment to provide 4G with a ready position to switch to 5G without huge incremental cost.”

The measures will aim to improve the quality of services, review regulatory tools while ensuring access to infrastructure is made easier for all service providers.

Previously, it was reported that Malaysia’s 5G services are likely to be available earliest by 2022.

With 5G, there will be much faster transfers of data, paving the way for various products and services, ranging from self-driving cars to “telemedicine”. Another example is that it will allow users to download a high-definition movie in a few minutes, compared to about an hour currently.

On Aug 29, Prime Minister Tan Sri Muhyiddin Yassin unveiled the Jendela plan, which aims to provide 96.9% of populated areas with a 4G mobile broadband network by 2022.

The digital infrastructure plan will be done in phases, and will provide a platform for the transition to 5G under the 12th Malaysia Plan (2021-2025).

The speed of the mobile broadband network will be increased from 25 megabit per second (Mbps) to 35Mbps.

This will also involve the end of the 3G network in phases until 2021 to put up 4G as a platform for 5G.

Phase Two of Jendela will be the transition to 5G.

By next year, MCMC hopes to upgrade 4,589 existing 2G/3G cell sites to 4G to expand 4G coverage and increase the speed.

“The technical requirement for a 5G rollout rests on a strong foundation of 4G coverage and fibre rollout.

“Without them, the 5G rollout will not realise the optimal benefits of the new technology,” MCMC explains.

The MCMC has also engaged with industry players, which have now provided more affordable Internet packages.

But there’s room for improvement in balancing out Internet access and usage across the states in Malaysia.

Overall, the broadband penetration rate per 100 inhabitants in Malaysia in the first quarter of this year stood at 127.4%. This means there were 127.4 broadband

subscriptions for every 100 people.

Now, Internet connectivity has become an increasingly crucial element in the new normal, especially with virtual learning in schools and higher learning institutions.

However, about one in three

students do not have any devices, based on a recent survey by the Education Ministry.

This means that nearly 40% of our students will not have access to online learning.

So far, the MCMC has developed 873 community Internet centres nationwide that are available for anyone to use for e-learning.

It says it is seeking feedback as to where students face challenges for e-learning so that temporary solutions can be taken.

“It is important to understand that infrastructure rollout is not something that can be done overnight as it has numerous challenges.

“This is more so in places where the terrain in itself poses a huge challenge, both in access and in its physical aspect,” the MCMC says.

It adds that embracing 5G should also not be regarded as a race of which nation adopts it first.

“Instead, the real winner is

the nation that could harness the technology most effectively to bring the best impact in building a sophisticated nation in the long run,” the MCMC says.

‘Speed up efforts to improve Internet access for students’