In our rush to attain Jannah (paradise) and piety, we forget the following: character references and critical thinking. For a certain set of Malay Muslims in Malaysia, peer approval of a person or organisation and the concept of total submission to faith mean accepting a teacher (usually foreign) and his or her teachings as God’s gospel. And this is where it gets dangerous.

Being seen as observant of their faith and yet modern has become urgent for many in Malaysia. Practising Muslims see their faith contested in the media – both at news portals and on social media – and feel it is their personal jihad to protect their religion, and today’s Muslim finds modern technology a boon in Islamic religious teachings: webinars, social media platforms such as Facebook, and instant messaging platforms such as WhatsApp and Telegram can reach Muslims in ways not possible before. Videos on tajweed (Quranic elocution) and prayers are forwarded and photos of Islamic doa (prayers) are made viral online. The observant and seeking Malay Muslim need not go far to find out more about his or her faith.

And no one is more rushed than the English-speaking, moneyed class of Malaysian Muslims who once led secular Western lives, in the race to redeem their naughty pasts and to reclaim their Muslim identities by organising private usrah (study circles) in their tony homes and online and by-invitation only events.

Now, attending a religious class at the mosque, in a public space or even in a home is nothing out of the ordinary. I attend usrah with my family and online halaqah (oral study circles) that study the Quran (I’m a big fan of UK-based Syeikh Muhammad Nizami). This is pretty much the SOP of most Muslim families and people in Malaysia, be they moderate or conservative.

But what we at Iman Research and Malaysian enforcement agencies have been observing in the past 10 years is the rise of foreign preachers (of both genders) teaching in a number of private homes a certain Islamic ideology that can be constituted as hateful or extreme. Here’s a caveat: not all foreign preachers are security threats but there are a few who are questionable.

And this is where we are challenged, for unless a terrorist threat is involved or there is an arrest warrant, we cannot apprehend such preachers in private homes. Most times, the teacher has a very wealthy and connected patron who ensures his or her stay in the country is safe and protected.

Most usrah held in these precious living rooms of the moneyed are harmless gatherings, where men and women learn about the Quran before breaking for tea and chats amidst a sea of designer handbags. However, a foreign teacher who is on our watch and holds court among wealthy Malays in an upper class neighbourhood, told his followers that terrorists are not extreme but fighters for the Islam they seek for Malaysia. And that Isis is a friend of Islam. One of the students told me this!

Then there are the fly-by-night Arab-speaking teachers on a visa run who teach Arabic to locals when they are in Malaysia (again, in private homes). When students are asked why they would rather learn about the language and religion from such teachers, they say it is because they “speak English”.

I myself have participated in an usrah that I found questionable. Again, held in an upper income neighbourhood, it had students who were mostly retirees and professionals eager to relearn their religion. The teacher was Malaysian, and I suspect of an intolerant leaning. During the class, we were advised that the only legitimate selawat (an Arabic phrase praising Prophet Mohammad, peace be upon Him) to recite was Selawat Ibrahim and that other selawat recitations are bida’ah’ (heretical). In fact, we were told that many of the Islamic practices we performed are bida’ah!

Malaysian Muslims need to be more vigilant about who they learn about their faith from. Students are sincere in wanting to learn about their faith but can be led astray by a charismatic preacher who might have investigated who his newfound flock of believers are and who sometimes, if not always, would have links to terror cells and groups.

From funding causes to clueless support of a radical preacher, the wealthy Malaysian Muslim is too eager in his or her pursuit of divine plus points. Donating cash to a cause these days must come with wariness – do you know exactly where your money is going to? A “Like” click on Facebook supporting a Muslim humanitaraian cause can lead you to being indoctrinated or recruited, and then slapped with potentially a terrorist charge by Malaysian police.

Here’s the thing: Many assume it is the clueless working class and rural Malays who do this but our findings have found the opposite instead. The money. Oh, the money that is channelled into these classes and causes. I’ll leave that for another day.

Another thing to note is this: There is this other assumption that such trends are led by men but we have found that women acting as recruiters or persuaders cannot be underestimated. Curiosity and naivete among sympathisers are usually the early drivers for women to seek out information in the name of “truth”. This would mean that deradicalisation programmes have to begin even before curiosity takes over. Malay Muslim women play an important role in religious missionary work and are as persuasive as the men, if not more so.

Do not underestimate how powerful women can be, even in terrorism. Here’s an example of a case study we observed six years ago: S was a highly educated professional, an accountant who worked for one of the Big Four accounting firms and was educated at one of the best schools in London. She also had a postgraduate diploma in Islamic Law from a Malaysian university.

She became embedded in an extreme ideology of Islam when she returned to Malaysia. The classes she took exposed her to what she deemed was the “right, proper kind of Islam”, which was totally divorced from the type of Islam she practised before. She took her classes seriously and took to wearing the hijab, and began preparing for her new life as a “proper, observant Muslim”. She became very active in Muslim humanitarian activities, and through the activities, found that radical Islam was the path for her.

She became more stringent in her practice of her faith when she befriended the wife of a well-known Malaysian preacher who was a member of a terror group. The preacher’s wife then introduced S to a local usrah, which was actually a front for a cell based in Kuala Lumpur. Among the members of the usrah S found a surrogate family that understood her passion and desire for the Islam she wanted.

The indoctrination began at these classes. It started with pleas for financial assistance for Muslim victims of war. Then the classes started promoting jihadi messages under the guise of Islamic teachings that preached about how jihad and helping brothers and sisters in Islam would earn a member brownie points with Allah. Save your brothers and sisters in Islam who are dying and being wounded in the name of God, the preachers said. S contributed to the usrah’s activities that were disguised as humanitarian work. Many sympathisers such as S do not identify themselves as jihadis; as far as they are concerned, they are donating funds to an Islamic cause. Where is the line where activism ends and terror begins?

S has since disappeared from Malaysia. 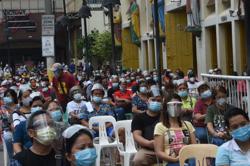