Back in business: A worker wearing a protective mask dresses a mannequin at the Urban Emporium store on Dauphin Street in Mobile, Alabama. Many American cities are lifting their stay-at-home order and allowing most businesses to open, subject to sanitation and social-distancing guidelines. — Bloomberg

LOCKDOWNS have devastated retailers and restaurants all around the world. An easing of restrictions won’t be the magic wand that waves their worries away.

Even when it’s possible for consumers to walk freely into their favorite shops and bars, they may be nervous about doing so. That puts the onus on retailers to make their locations as reassuring as possible. There’s a range of things they can do, from installing stations dispensing hand sanitiser with a wave, establishing distance markers to keep shoppers safely away from each other and even altering store layouts to keep patrons from crossing paths. Dressing rooms are likely to remain closed for the foreseeable future.

As for casual dining outlets, it will mean eliminating some tables to put more space between them, and in pubs, finding ways to maintain a festive atmosphere with fewer revelers.

There’s a cost associated with making all of these changes, while also protecting employees with masks and screens, and rethinking kitchens and break rooms. Some venues may need more employees to clean more often, disinfect merchandise and where necessary, station someone at the door to let one shopper in as one exits. In restaurants, it could mean new apps to allow people to place orders from their phones, or even taking a cue from China and investing in robots to serve up the food.

With little money coming in to businesses that had to shut their doors, more outlay to refit facilities is an unfortunate drain on cash.

For some, it’s a big question whether the investment is worth it, especially if there will be fewer customers as people adjust to a new reality living with the coronavirus. There may be some pent-up demand – just look at the frenzy of luxury shopping in China, the French lining up at McDonald’s drive-thru windows and Britons queuing to get into Kingfisher Plc’s B&Q outlets to stock up on plants and paint when the DIY chain reopened. But that might prove short-lived.

Even if customers do want to return to strip malls and main streets – and that’s not clear right now – restrictions on the number of shoppers allowed into locations at any one time will mean there are fewer sales per day. Casual dining restaurants could be operating at just 30-50% of their usual capacity where strict social distancing rules are in place. Yet when stores and eateries reopen, they will still have to pay their rent and other bills.

In retail, initially, that risk is most severe for value retailers and the dollar stores, because they rely on a large number of purchases at lower prices. But as the economic hardship from the pandemic hits home, consumers are likely to trade down to more affordable chains, offsetting this pressure.

Whatever their target market, all retailers look set to suffer from lower sales. For example, Macy’s Inc. plans to begin opening some of its department stores on Monday, and Chief Executive Officer Jeff Gennette told Dow Jones that he expects the locations that come back first to do less than a fifth of their normal sales volume initially.

Even if lockdowns last four months, their effect on retail sales may last the equivalent of six months, because of fewer transactions as a result of social distancing, nervous consumers, and the inevitable strain on shoppers’ finances that will follow the pandemic, according to research firm Forrester.

As for pubs and bars, crowded Friday and Saturday nights are the profit drivers. That may change with limits on the number of people who can enter. Who wants to go to an empty pub anyway?

The fear factor and hassle that restricted access to stores brings – shopping for even the simplest items can become extremely time consuming – means that consumers will probably choose to shop online if they can. Internet purchases in the UK will account for 41% of all retail sales excluding food over the next 18 months or so, up from 29% at the end of 2019, according to independent retail analyst Richard Hyman.

No wonder retailers and restaurants will do everything they can to compete in that space. No-contact click-and-collect services, used by many during the lockdown, will likely expand to other retail sectors. Restaurants may remain focused on takeaway for the time being, and options such as the make-at-home kits already on offer in some US restaurant chain.

Business won’t open all their sites all in one go. Tackling social distancing is likely trickiest in big cities, such as London and New York.

UK clothing retailer Next Plc will concentrate on large stores out of town stores first, as they tend to be roomier with longer opening hours and spacious parking lots that can accommodate queuing customers. It will monitor how this works before moving to smaller stores in more urban areas. As one of the strongest names, Next can afford to wait and see.

But elsewhere, it is likely some locations will never resume trading, given that the economics of doing business will deteriorate. Even healthy chains may never open 20% of their stores again, estimates Stacey Widlitz of SW Retail Advisors.

There is one consolation for business that do pull up the shutters once more. They’ll face a competitive landscape that is significantly diminished. But that may count for little given the strain from the lockdowns and the meager recovery that is set to follow. — Bloomberg 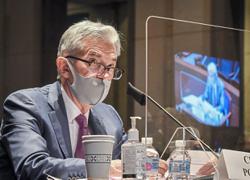