Waqf solution: We need to revive institutions that encourage mutual help and generosities to people in need in the post Covid-19 society.

FATALITY figures from the Covid-19 pandemic are increasing every day around the globe. At the time of writing, almost 150 thousand lives have been lost with the number of infections already more than 2,000,000. There is no news yet on the availability of any vaccine and, therefore, the above numbers are likely to increase in the coming months.

The economic impact of Covid-19 will likely be worse than the Great Depression of the 1930s. Statistics coming out from the United States, the most important player in the global economy, paint a very grim picture. Over a period of just three weeks up to early April, a staggering 16.8 million Americans lost their jobs, which is worse than even at the peak of the global financial crisis of 2009. One report predicted that 47 million jobs could be lost in America resulting in a 32% unemployment rate.

Some may think when the pandemic ends, and businesses resume their operations and people go back to work, then the economy should immediately recover.

Unfortunately that is just a hope. The reality is going to be more painful and messier.

The principal reason is the extent of global indebtedness which is at its highest in human history. It now stands at more than US$253 trillion. If translated into ringgit, that is more than RM1 quadrillion, a term which not many have ever come across.

All three sectors of the global economy – public, corporate and household – are struggling with high debt levels and are therefore extremely unprepared for a slowdown in the economy. This problematic situation was actually predicted. For example in October 2019, the International Monetary Fund noted that companies had debts that risked becoming a US$19 trillion time bomb in the event of another global recession. It further stated that almost 40% of the corporate debt in eight leading countries – the United States, China, Japan, Germany, Britain, France, Italy and Spain – would be impossible to service if there was a downturn half as serious as that of a decade ago. Unfortunately, instead of reducing the amount, the debt level further increased as if everyone was oblivious of the possibility of a recession.

Well, that recession has now obviously arrived in a spectacular way, and as a result many segments of society are facing the prospect of financial ruin, especially businesses that are highly indebted. All these businesses now argue that they will not survive without government bailouts or assistance. But the fact is most governments are themselves struggling to pay debts. For example, the Malaysian government has a debt burden of over RM1 trillion while the US federal government debt is more than US$25 trillion, or 111% of its GDP. The Japanese government is in the worst situation with a debt to GDP figure of 250%. Therefore, the only way governments can provide financial assistance is by incurring more debt which eventually will have to be paid for by the ordinary taxpayers. So government financial assistance is not really a solution but rather a temporary postponement of the problem to a later date.

One might think that the medical sector would benefit greatly from the Covid-19 pandemic since many patients would visit hospitals for treatments. However, in almost all cases the hospitals that accept Covid-19 patients are public or government-owned hospitals, not private hospitals. This is not really surprising. The fact is, private hospitals are for-profit business organisations. They do not exist for pure, altruistic reasons or objectives.

In addition, many private hospitals are indebted to banking institutions. For example, at the end of September 2019, IHH Healthcare Berhad had RM9.08bil of debt while the total borrowings of Malaysia’s largest medical group KPJ is almost RM1.5bil. These hospitals need to ensure that their income is not compromised so as to ensure their debt repayment capacity is also not compromised. They are, therefore, not in a position to accept Covid-19 patients since most of them are likely to be uninsured and not able to pay for treatments.

The indebtedness situation of society is made worse by the fact that the banking industry creates new money every time it issues loans to borrowers. The amount of new money being created in Malaysia is almost RM7bil a month. As a result, the total amount of money in the country’s financial system is very high, thereby reducing its purchasing power, which leads to the phenomenon of inflation. In a situation where wages and salaries’ rate of increase is lower than the inflation rate, the cost of living will increase and many will find their income inadequate to cover their needs.

Moreover, the current economic model is ultimately beneficial only for a small segment of society – the wealthy elites, especially owners of financial organisations as well as owners of large business organisations. When an economy is in a debt crisis as what is happening now, the banks will still insist that loans be paid. As a result business organisations are forced to lay off workers or cut wages leading to widespread suffering, especially within the bottom strata of society.

The current severe economic problems which are all related to high level of indebtedness should indicate to us that we need a new economic framework where economic activities are not highly reliant on the banking industry for funds. Equity financing should be the preferred method for obtaining funds, where people with capital are forced to share the business risks. This method will also mean that SME (small and medium enterprise) firms, a sector that provides significant employment opportunities, will be able to thrive. At the moment banks are more inclined to ignore them and prefer to lend to large firms in order to minimise repayment risks.

We also need to revive institutions that encourage mutual help and generosities to people in need. One of them is already in existence now and is called waqaf. The basic concept is not too different from endowments. In fact waqafs are the precursors to modern day endowments or foundations, where properties or other assets are donated to be used for the benefit of society. A board of trustees will be appointed to make sure these assets will continue to be used for this purpose.

During the Abbasid period of Islamic history when waqaf dominated the economy, medical services were provided free of charge by waqaf-funded hospitals. They competed with each other to provide the best free services, as the ones with better reputations would attract more donors. Even waqaf-funded free veterinary hospitals were operating during that period in the city of Damascus, Syria.

This is very different from the current situation in our country where medical costs of debt-funded private hospitals are prohibitively high and beyond the reach of most people.

In addition, we should encourage people to be more moderate in their expenses and learn to live within their means. We should nurture the culture of giving, of helping others in need, either directly or indirectly through endowments and waqaf institutions.

Without a doubt it will not be an easy task since consumerist values – where social status, values, and activities are centered on the consumption of goods and luxury services – even if funded by debt, are still strong in our society.

Therefore, efforts cannot be expected to come only from the government but also from NGOs and individuals. Without a doubt, the virtues of helping others in need have to be an integral aspect of these efforts.

Prof Mohd Nazari Ismail is from the Faculty of Business and Accounting, Universiti Malaya. The views expressed here are solely the writer’s own. 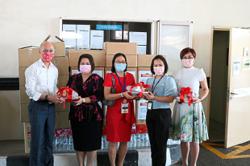