Let’s stand by our women

Women peacebuilders meeting at the 8th Ican forum last year. Peacebuilding isn’t a gendered vocation, but women have the trump card over men because of their emotional intelligence, says the writer. — Photos: Ican

LAST November, I attended the 8th Annual Women, Peace and Security Forum organised by the Inter-national Civil Society Action Network (Ican) in Oslo. Supported by the Norwegian Foreign Affairs Ministry, the forum looked at “Sec-uring the gains and strategising the future of the global women-led movement for inclusive peace and security”.

This was my first Ican conference, though we had already met in Manila a few years ago, at a workshop organised by the Philippine Centre on Islam and Democracy (PCID). My exposure to peacebuilding overall was little: I knew of Mercy Malaysia, and I had friends in humanitarian and human rights organisations who worked on peacebuilding in whatever capacity they could. I’ve met our humanitarian stars Datuk Seri Dr Jemilah Mahmood and Deborah Henry at the many events Kuala Lumpur organises, but other than that my knowledge was shallow, to say the least. In the sector I (and Iman Research) are in, it’s about research security-related issues and working with communities and civil society organisations to build resilience.

That short one week was inspiring – meeting and talking to women peacebuilders such as Sanam Naraghi-Anderlini, the founder of Ican, Hamsatu Allamin of Nigeria, Amina Rasul of PCID, Amporn Marddent of Center of Excellence in Women and Social Security, Walailak University, Thailand, to name a few.

Hamsatu, like many of her peers at the conference, negotiated with the Boko Haram by reaching out to their women. She also dealt with her government and the communities impacted by the militants, by rehabilitating and reintegrating communities where they were heavily recruited. Hamsatu and I shared an analgesic ointment during the conference; the Norwegian winter was quite harsh on our equatorial bones!

Back home, it has become more apparent, to me at least, that peacebuilding must be an important component of preventing and countering violent and hateful extremism. There have been many attempts and activities at peacebuilding: interfaith dialogues, working with communities via civil society organisations, stakeholder engagements (at this point, after so many of these, I’m wondering what it means anymore), and many other programmes. They work, but could it be only up to a point? Sanam founded Ican, which showed the writer that peace-building must be an important component of preventing and countering extremism.

Malaysia is no stranger to peacebuilding. Malaysia, through the Malaysian Peacekeeping Centre, provides training and capacity building on multidimensional peacekeeping for international military, police and civilian personnel who will be embarking on United Nations peacekeeping missions in conflict areas around the world.

This is under the purview of the Foreign Affairs Ministry, and on its website it is stated that: “Since 1960, Malaysia has participated in over 30 peacekeeping operations with the deployment of 29,000 peacekeepers from the Malaysian Armed Forces and the Royal Malaysia Police. The deployment of Malaysia’s military and police personnel in various UN Peacekeeping Operations is a manifestation of Malaysia’s strong commitment to shared responsibilities towards the early and peaceful resolution of conflicts.

“In addition to UNPKOs (UN peacekeeping operations), Malaysia has participated in other UN-man-dated missions, namely the three UN-mandated Nato-led PKOs; which are the Implementation Force and Stabilisation Force in Bosnia-Herzegovina; the International Force East Timor and International Security Assistance Force in Afghanistan; and the International Monitoring Team in Mindanao, the Philippines.

We have our humanitarian stars, who are women, such as Dr Jemilah, whose work with Mercy Malaysia has now reached international heights, and she herself has gone on to greater things, serving as the Under Secretary-General for Partnerships at the International Federation of Red Cross and Red Crescent Societies since 2016. We also have Henry, a former Miss Universe Malaysia, who has founded Fugee School and works with refugees in KL.

But we also have many other Malaysian women – most working out of Malaysia – serving justice and saving mankind from its own follies, such as war and terrorism as well natural disasters. I’ll rattle off a few friends’ names here: Shazeera Zawawi who is with the Association of the Prevention of Torture (see story on her on page 16); Carol Gomez who provides trauma-

informed therapy, forensic psychological evaluations for court, and healing arts work with survivors of torture/refugees from all parts who land in the United States; and Animah Kosai who founded a movement called “Speak Up” which encourages a corporate culture of openness, allowing people to raise issues of concern, including sexual harassment at the workplace, without fear of reprisal.

March 2020 sees we women all over the world celebrating how far we have come, and today, on Inter-national Women’s Day, promoting an equal world means an enabled world. And during this month itself, Ican, with Iman Research, supported by Microsoft Malaysia and the Canada High Commission, will launch the global Stand By Women Peacebuilders Campaign, alongside International Women’s Day and the Commission of the Status of Women.

The agenda is to introduce what peacebuilding is to a Malaysian audience, and how Malaysian women can participate. There are four pillars to the campaign:

> Recognition: Recognise women peacebuilders in law and policy to ensure their inclusion in peace and security processes;

> Protection: Protect women peacebuilders to ensure the security of their lives and their work;

> Funding: Fund independent women-led peace and security work to ensure it is sustained;

> Appreciation: Promote appreciation of who women peacebuilders are, why they matter, and what their work entails to generate political will to support them and their work. Inspiring courage: Hamsatu, like many of her peers at the conference, negotiated with the Boko Haram by reaching out to their women.

Peacebuilding isn’t a gendered vocation, but I believe women have the trump card over men because of their emotional intelligence. And being a woman requires you to think on your feet and be nimble, because even during this day and age, we are still invisible. UN Women remarked last year, “Women’s inclusion in peacebuilding processes is essential for long-term success. This is proven. Gender-equal participation contributes to longer and lasting peace after conflict. Despite strong evidence in favour of their inclusion, women remain largely invisible in and sidelined from formal peace processes and negotiations.”

Peacebuilding isn’t always about conflict negotiation and brokering peace with terror groups. There are many entry points to it: expressive arts, fundraising, impact investing, capacity training and leadership. There are hard and soft approaches towards creating a loving, inclusive world, and we need more women involved, to work alongside with their brothers in peace.Dina Zaman is one of the founders and partners of Iman Research, an organisation studying society, religion and perception. The views expressed here are solely her own. The writer urges all Malaysians to join Iman Research in the global Stand By Women Peacebuilders Campaign on March 13. 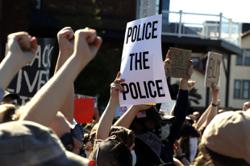