Veterinarian Dr Zainal Zahari Zainuddin says at the Borneo Rhino Sanctuary, they prioritise preventive measures against illnesses or infections in the rhinos.

“We weigh the rhinos every two weeks as their weight is an indicator of their health, and if they are eating well. Every month, samples of their poop, urine, blood, soil, water, food and the ground, are tested for hazardous bacteria and death-causing pathogens like salmonella, melioidosis, klebsiella or tuberculosis.

“When they go foraging at the fenced forested paddock, they sometimes sustain wounds on their feet, and we have to wash them with antiseptic. They will be out the whole night and return home only the next morning.

“Usually, they spend up to 19 hours a day in the paddock, which is really important for them to exhibit their behaviour as they would in the wild, and provides them with some form of needed enrichment.”

For Iman, treatment is given whenever there is a problem since there is nothing much Dr Zainal can do about her tumours. While there is no more blood oozing out of her, Iman still secretes mucus time and again, which he suspects is from her vagina or the uterus. Ultrasound tests are conducted on her every two to three days.

The five keepers at the sanctuary collect about 200kg of plants from the forests or plantations for the rhinos’ consumption. 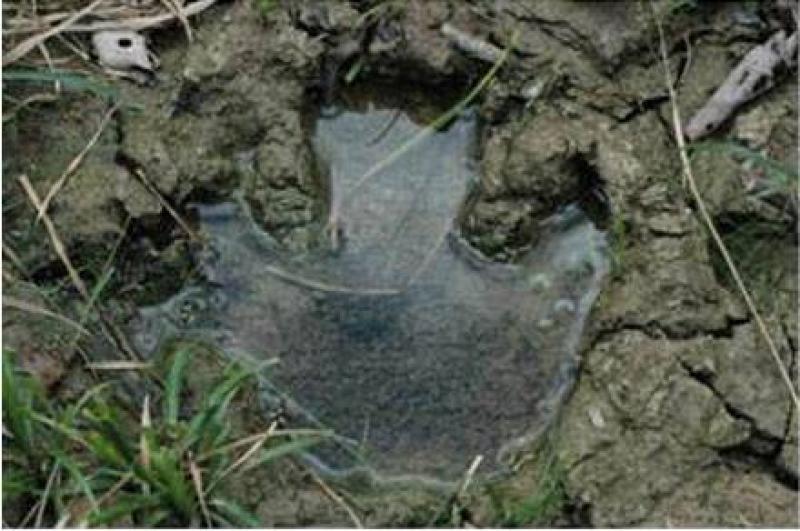 Footprint of a Sumatran rhino in the forests of Sabah.

Dr Zainal says rhinos love wallowing in mud or water, to cool off and avoid insects.

“A good wallow contains vital minerals that help them de-worm and heal wounds. Rhinos easily identify good wallows which they would build in under two hours.”

Wallows have proven to be a defence or camouflage mechanism of sorts for rhinos like Puntung. She had dug some 30 wallows in the forest, confounding the Bora team as to which wallow they should set their trap in.

“In the end, they resorted to closing all the wallows in a bid to drive Puntung towards the trap. But Puntung was not to be outdone. She disappeared for two weeks, and simply could not be traced.

“She was somewhere in the forest, hiding, that’s her territory. It took us one year and 10 months to finally capture her.

“In Iman’s case, we had her in about eight months. There’s a lot of work involved to successfully bring in a rhino, and the task becomes tricky and difficult when you are going into their homeland. This is when we can only rely on whatever knowledge we have about the main trail they frequently use to get to their wallows, or their feeding trails.

“If the animal is displaced, and ends up in oil palm or rubber plantations, it’s much easier to get to it, because he or she would have been disorientated.”