Power up with palms

Md Arfizal Md Ariffin, executive director of Detik Aturan, said the company started researching into new uses for empty fruit bunches when no one else was doing so.

Palm biomass is a source of renewable energy.

“It was tough,” said Khairil Annuar Khalid, managing director of the agro-waste solutions company. The company started in agricultural waste management in 2005, processing and converting agricultural waste into compost. In 2009, when the burning of agricultural waste became a hot topic, Detik Aturan had to find a faster way to convert waste. Their research led them to discover the use of pellets in Europe. Detik Aturan has to modify pellet-making machines such as this one to suit local biomass because there are no such machines in the world that are made for oil palm biomass.

“We turned them into pellets and carried out combustion and firing tests with Uniten. From there, we found out which one was suitable to be commercialised. In 2010, we began our commercial activities.”

Because paddy is seasonal, the company had to look elsewhere for a more reliable source of biomass. Said Khairil Annuar: “We found that the abundance of biomass in Malaysia was from oil palm. We did some research with empty fruit bunches (EFB). There were pellet mills then, but they were small-­scale, producing something like 300 tonnes per month. And they used sawdust. But back then no one knew what the characteristics of EFBs were, so we had a tough time. They were very difficult to pelletise. But we worked very hard with engineers to find a solution.” Md Arfizal said countries such as South Korea see biomass pellets as a substitute for wood pellets because of the latter’s rising price.

Today, Detik Aturan runs a pellet plant in Tanjung Karang, Selangor, and it has even worked out a deal with power companies in South Korea. That, too, was a tough effort, because South Korea had a regulation against the import of oil palm biomass which was categorised as waste.

“Two years ago, we worked with our local South Korean partner, and when the power plants there tested out our EFB pellets and saw the potential to reduce the consumption of wood pellets, they campaigned to their government to review the law,” said Arfizal.

“They were facing an increase in the price of wood pellets from Canada and the US. So they see oil palm pellets as the best substitute for wood pellets. Finally, in December last year, the South Korean government allowed EFB pellets to enter the country. The big procurements will start in July,” said Arfizal. 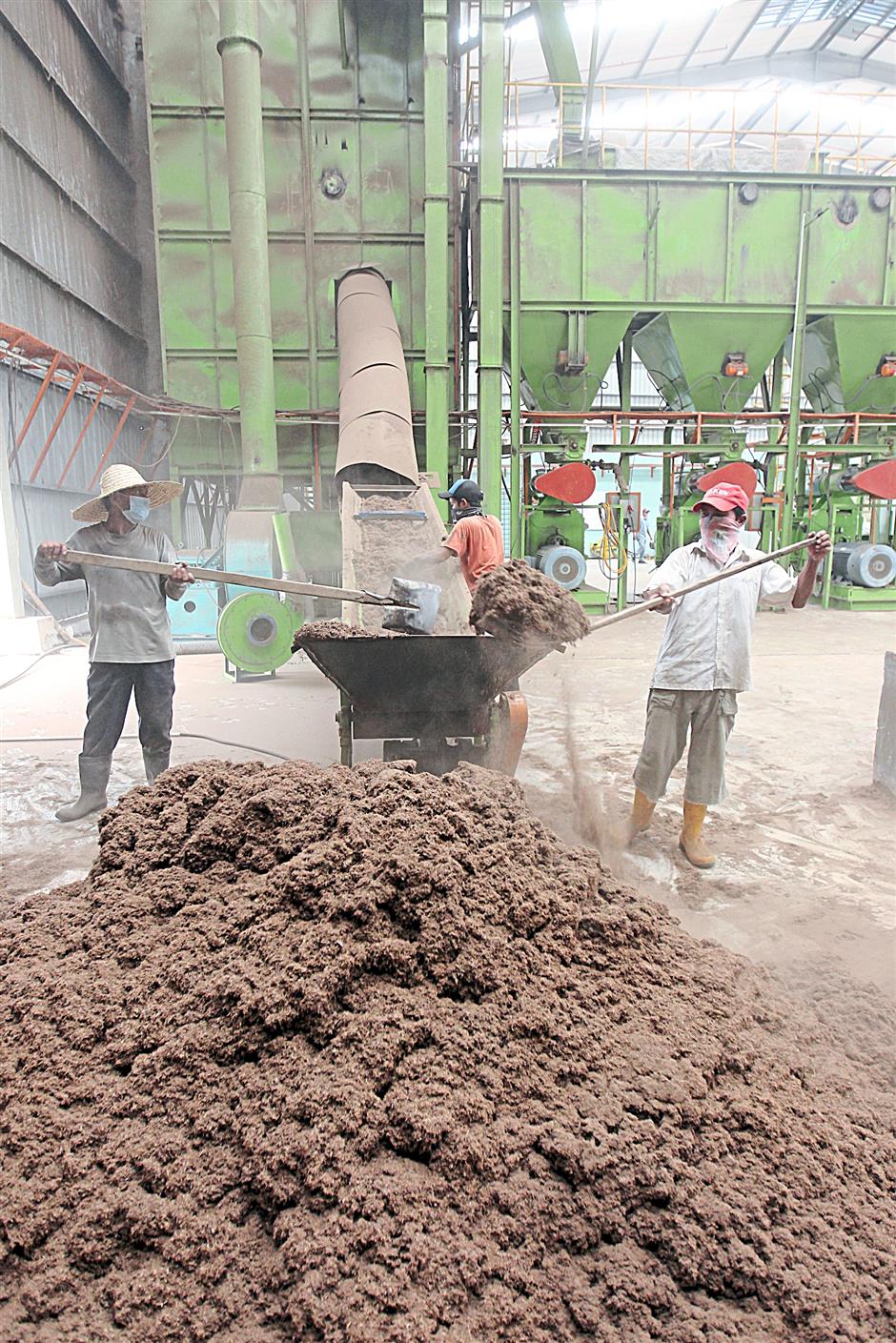 Finely shredded oil palm biomass being fed into machinery for the production of pellets.

South Korea’s power companies have asked Detik Aturan for a commitment of 100,000 tonnes of pellets per month, but its plant’s output is currently at 5,000 tonnes per month. This means Detik Aturan needs another 20 pellet plants to meet that demand.

“But we committed to them that by July, we would provide them 10,000 tonnes per month,” said Khairil Annuar. “By next year we will work out with them to ship 100,000 tonnes per month. So now we are working with various plantations and investors. Our plan is to build another five to 10 factories for the next one­-and-­a-­half years.”

He said for a demand of 100,000 tonnes per month, the value per year is almost half a billion ringgit. He added that the power plants in South Korea are already modifying their systems to use EFB pellets. The company has started building a second plant in Terengganu, with the next one planned in Sabah.

“In Terengganu, we are building the pellet plant inside a palm oil mill, and it will collect all the biomass from the surrounding mills. Currently there are five or six mills in the area, and all are owned by different companies. So we have to meet with the various companies for supply. We are looking for long-­term partnerships. For example, if a nearby mill has excess power, we will buy it from them,” said Arfizal.

Khairil Annuar added: “There’s more awareness about biomass today. But the plantations adopt a wait-­and-­see approach, because this is not their core business. They will wait until the market is mature.

“But for us, we cannot wait. We have to make sure that our products are accepted by the world.”