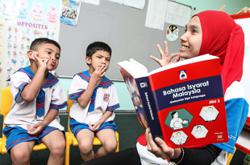 OVER two decades have passed, but Malaysia’s deaf community is still fighting an uphill battle for its “mother tongue” – the Malaysian Sign Language (Bahasa Isyarat Malaysia or BIM) – to be used in schools.

Although the Education Ministry has adopted Unesco’s Salamanca Statement and Framework for Action on Special Needs Education (1994) and the Persons with Disabilities (PWD) Act (2008), and put in place policies in accordance with the Act, deaf students are still denied the opportunity to learn in BIM, said Malaysian Federation of the Deaf (MFD) executive director Mohamad Sazali Shaari.

The Salamanca Statement and Framework for Action states that educational policies should take full account of individual differences and situations, while the Persons with Disabilities Act 2008 recognises BIM as the official sign language of the deaf in Malaysia.

“Given that Malaysia is a signatory of the Salamanca Statement and Framework for Action, the first language of the deaf people should be taught in schools.

“MFD, comprising 14 deaf associations nationwide, has been lobbying for BIM because the community should have a say on how our kids are taught.

“BIM has over 9,000 signs used by the various ethnic communities in their daily lives. Mastering a language like Bahasa Melayu or English is difficult, especially when you cannot hear.

“For students to score in language subjects, they must first have a strong vocabulary. That’s why BIM is important, ” Mohamad Sazali said.

He also pointed out that despite a circular being issued on Jan 4,2017, by the then Education director-general instructing schools to use BIM, the language continued “to be of less importance” compared to the Manually Coded Bahasa Malaysia (Kod Tangan Bahasa Malaysia or KTBM) which is currently being used by teachers to teach school syllabus to the deaf students.

“The existing policies are clear but the implementation remains an issue.”

The Malaysian deaf community, he said, started losing the use of their mother tongue it the 1960s when American Sign Language (ASL) was introduced in the country, pushing colloquial signs out.

Then in 1978, KTBM was introduced and taught in schools.

“KTBM is not a language, it is a medium used to deliver the learning of the language – like Morse Code. It contradicts with the teaching and learning process for children and teachers in school.

“The deaf students communicate using BIM, but KTBM is used for their studies – causing confusion.”

Another pressing matter that needs the ministry’s attention, said Mohamad Sazali, is KTBM proficiency among teachers.

The use of KTBM is mandatory yet those teaching it are lacking in skills, he said.

“Teachers are not qualified and can’t even apply sign language in their teaching. So how can they teach the deaf children?

“Even the deaf children at primary school level have passed comments about the teachers, saying that they don’t know sign language – how are they supposed to teach us?” he said, while calling on the ministry to come up with a better method of evaluating these teachers. — By LEE CHONGHUI