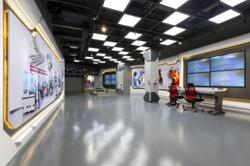 (From left) Lim, Lee and Ling have made the Forbes Top 30 Under 30 Asia 2018 list for their efforts in social entrepreneurship.

Acclaimed for their efforts on The Picha Project – an initiative that empowers refugee families through food catering and delivery services – the trio are now internationally known for coming up with sustainable solutions that address the plight of refugees.

Ling made it a point to thank all stakeholders of the Picha community, especially their mentors, partners, clients, alma mater and the refugee community.

“We are thankful and encouraged to receive this recognition because it shows that the world cares about the plight of refugees.

“We do not see this as a personal achievement but the success of the entire team behind us,” said Ling who serves as Picha’s chief marketing officer.

She said the recognition pushes them to work harder and strive towards creating greater impact.

“We can and will do more,” she added.

Encouraging UCSI students to realise their aspirations, Ling said that it was crucial to align one’s goals with the impact one could make on the community.

Ling, Lee and Lim currently work with around 60 refugees from 12 families that come from some of the world’s most war-torn nations like Syria, Iraq and Afghanistan.

Together, they have served more than 52,000 meals to their clients.

Fifty percent of all revenue is given back to empower the refugee families and more than RM600,000 has been disbursed to date.

Moving forward, the trio hope to cast a wider net by working with 30 refugee families this year – more than doubling their operational capacity.

They are also seeking to implement an automated back-end system and efforts will be made to establish Picha kiosks in more organisations.

Awarded each year, the Forbes Top 30 under 30 Asia recognises change makers, leaders and seed planters – under 30 years of age – in business, social entrepreneurship and sports, among other fields.

The three ladies first met as UCSI student leaders who volunteered at a refugee learning centre under the Hands of Hope initiative – an outreach programme co-founded by Ling that educates underprivileged and refugee children.

After serving for several months, they noticed a trend where refugee children would cease attending classes in order to help their families make ends meet.

They decided to kick-start Picha, named after a refugee child they had come to love in mid 2016 to empower refugee families in Malaysia.

At UCSI, Ling majored in psychology, Lee read accounting and finance while Lim studied music. They graduated in 2017 and their success story has inspired cohorts of UCSI students.

Ling also stands out as the UCSI 2017 Chancellor’s Gold Medal award recipient for her leadership skills and contributions to society.

They have also won the Malaysian leg of the Chivas Venture, a global start-up accelerator by the famed distillery company.

They will now represent the nation in Amsterdam next month for a share of a US$1mil (RM3.93mil) prize pool.