Success with the DLP

Three hundred Dual Language Programme (DLP) schools have quadrupled to over 1,200 in one year. Response is overwhelming - and voluntary. StarEducate speaks to stakeholders about the DLP’s success, and its future.

SMJK Kwang Hua was among the first to apply for the Dual Language Programme (DLP). One year on, the school’s principal, Law Choon Lee, says it was a sound decision.

The parents, teachers and board of directors, were unanimous in wanting the programme, he says.

There hasn’t been a complaint since. Now other parents are trying to get their children into the school because of the DLP, he says.

Kwang Hua, he adds, has a pool of dedicated teachers who are able to teach in English, and even prepared their own teaching materials. And the students are adapting well.

Although their primary lessons were in Mandarin, they’re able to cope. The medium of instruction is not an issue. It’s how hard you are willing to work. Even those not in the top classes can keep up after a short adjustment period.

“We must continue with the DLP. It’s the way forward and for the good of our children. When these students continue their tertiary education, everything will be in English. There is so much content on the Internet that they can use, and almost all of it is in English.” 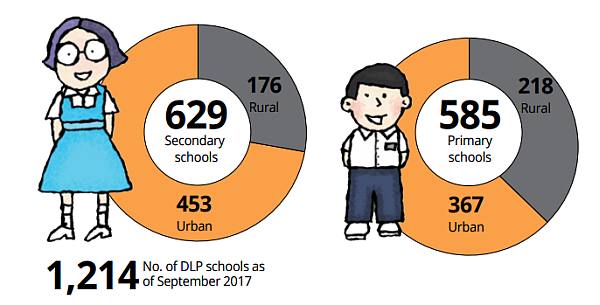 The rise in demand, says Universiti Malaya’s (UM) Language and Literacy Education department head Assoc Prof Dr Juliana Othman, could be due to more schools being ready for the DLP.

When the programme was introduced last year, it was only made available in high performance schools where the majority of students speak good English, and the facilities are readily available, she says.

“One year down the road, more schools have the necessary resources, more books have been translated from Bahasa Malaysia (BM) to English, and more teachers have been trained to teach math and science subjects in English.

The DLP, she says, may facilitate the learning of English, but it’s “too strong a claim” to credit the DLP for students performing better in their English tests.

“Did all the DLP students sit for the same English test? If they didn’t, we cannot conclusively say that the DLP has led to them doing better in English because the standard of the tests would vary in the different schools.

“There are many reasons why students perform better. These include greater motivation, extra tuition, their environment, family encouragement, and stronger teacher support. The DLP could just be one of the push factors,” she says, adding that more studies are needed to see whether DLP students did better in math and science subjects when they were taught in BM, Tamil or Mandarin, or after they were taught in English.

She says it’s important to be clear on the DLP’s aim. Is the goal to give students more access to math and science reference materials, which are mostly in English, or is it to improve language proficiency, she asks. 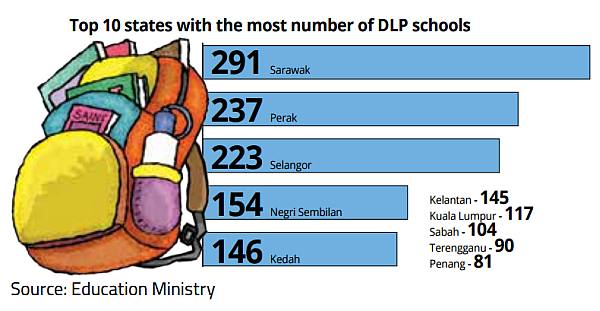 “If the aim is to improve general language proficiency, then we should be looking at the Highly Immersive Programme (HIP), not the DLP.

“It takes two to three years to gain general language proficiency, but it would take between five and seven years to have a good command of cognitive academic language which is used in the teaching of math and science subjects.”

When Prime Minister Datuk Seri Najib Tun Razak rolled out Budget 2016, he noted the importance of the language in facing global competition and announced two initiatives – the DLP, and the HIP which is aimed at strengthening English by increasing usage hours outside the classroom.

“If you want to improve conversational proficiency, focus on the HIP, not DLP. DLP is good for those with intermediate or high proficiency, because they’re already good in English. Those who are weak in the language will struggle under the DLP.”

“That’s why vernacular schools aren’t keen on the DLP. Their students are already good in math and science subjects so they see no reason to learn it in English. If they adopt the DLP, results in these subjects may be affected.”

Take Chinese schools for example. Their first language is Mandarin. Having to learn BM is already a challenge, what more now with English not only for conversational purposes, but as an academic language, she points out.

“Introducing English in vernacular schools must be in a non-intimidating, and non-demanding way - for instance with HIP. HIP is effective because it helps create interest in English and motivates students to speak the language.”

Physics teacher Evelyn Soon Mee Lian, who taught the subject in BM for six years before the switch to English, says languages don’t make a difference to her method or to the students’ understanding, if lessons are prepared well.

“It’s how we as teachers convey the message so that it’s absorbed, that matters.”

Lim Beng Tin, who teaches math, says her students - even those with limited vocabulary - can follow her lessons. While she admits that some students take a little longer to absorb what’s being taught, they manage.

“Initially, it’s tough for some because of their limited vocabulary. It takes time. They pick up as they go along.

“You can’t have results overnight. But by the end of year, you can see the difference. The most important thing is that they want to learn.

The syllabus is the same, only the language is different.”

Teachers, she feels, can teach the DLP but more quality books with better translation is needed.

“We can easily spot a student who’s struggling. We use simpler words instead of big, intimidating phrases, to explain lessons so there’s no question of students falling back in class because of the medium of instruction.”

Relating it to her own experience as a trainee teacher learning education pedagogy in BM, she shares how later teaching classes in English was not a stumbling block for her.

“It’s the same for my students now. Although they previously studied the subjects in Mandarin, learning in English now isn’t hard. With Google, it’s so easy to check and translate.”

SK Taman Megah was one of the schools chosen to pilot the programme and they didn’t just stop at having a portion of their classes teach science and math in English.

In fact, all eight of their Years One and Four classes started using English for those lessons in 2016.

The parents were demanding that the school allow all the pupils to study in English, says the school’s senior assistant (curriculum) Lee Siew Li.

Not only that, she adds, the school has had to turn down about 100 students last year as there just weren’t enough classrooms to accommodate them.

The school’s Parent-Teacher Association chairman Rodney Teoh says parents want the programme because it benefits their children in the short-term, and long-term.

“Majority of the pupils in this school communicate with their friends in English. So, it’s easier for them to learn in English, and it’ll help them cope better when they go overseas or university later on,” he adds.

Recalling a delay in delivering the new textbooks when the programme first started, Teoh says the parents got proactive and immediately set out to translate the first few chapters of the old textbooks so that the pupils did not get left behind. It’s a good thing they did as the books did not arrive in time for the start of the school year, he adds.

Performance Management and Delivery Unit (Pemandu) executive vice-president and partner Tengku Nurul Azian Tengku Shahriman says there’s a wealth of math and science information, online and in books, that’s readily accessible to teachers and students. This, she says, enhances both the teaching, and learning, experience.

“Being proficient in English makes students more employable, both locally and globally.

“More importantly, a strong command of English ensures upward mobility for students to create a better future for themselves, and to contribute to the nation.”

A year-end review session with the Prime Minister will be held to evaluate the DLP’s achievements and future targets, she shares.

“He will set next year’s target for the ministry.”

Dr Juliana expects the demand for DLP to grow as more teachers are trained, and greater emphasis is placed on HIP. HIP, she believes, is a great motivator for students to want to learn English. Through the use of English outside the classroom, learners will see the relevance of using English in the real world.

“Motivation is crucial to learning. Look at how interest in K-pop and K-drama has led to our students picking up the Korean language. For English to improve, both DLP and HIP are important and they complement each other.”