AS a four-year-old, Daphne Wee Yen-Qi would repeatedly watch The Land Before Time at least twice a day.

The story about a young dinosaur’s struggle for survival struck a chord within her.

“I realised that it was the music behind the story that touched my emotions. Whenever I watched the scene where the mother died, it always made me cry because the music made it an emotional experience for me.

Daphne chose to study a music degree programme at the Berklee College of Music in the United States (US).

Taking Film Scoring as a major and Writing for Television and New Media as a minor, she excelled in her grades and was listed on the Berklee College dean’s list for the summer semester of 2013.

“My parents are spending a lot on my education. Berklee is one of the top-ranked music colleges of the world so there is pressure to do well.

“In the end, the total cost of my music degree was more expensive than my sister’s law degree in the United Kingdom,” she said.

She is grateful that her parents did not impose their dreams on their children and respected their choices.

Daphne first went to Boston in May to further her studies and plans to live overseas after her graduation in 2015.

The thought of moving to Los Angeles after graduating scares her as the competition is intense there.

“It can be a real challenge for me to break into that industry. So, in order to survive in Hollywood, I have to ρrst survive in Berklee.

“Recently, I met Hollywood’s A-list composer, James Newton Howard, who scored the music for The Hunger Games, The Dark Knight, Batman Begins and The Bourne Legacy. It was very inspiring.

“I’d like to think that Berklee has helped me to be more outspoken, expanded my connections, and gave me a chance to meet composers who are already in the industry,” she said.

When asked if she had a favourite instrument, she replied that her most used instrument was her own personal computer.

“Composers these days use their computers to do work more than anything else; creating scores, sequencing, orchestral mock-ups and more, but I also love to play the piano and consider that one of my principal instruments,” she said.

Daphne is motivated to complete her studies within six semesters so she can move towards her own career fulfilment.

“If you study the course that you like, half the battle is won; so it is important to do what you desire and know that you have the talent for it,” she said. 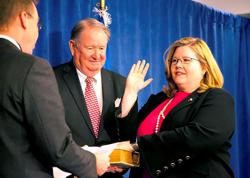