Sixth Rawang Open Badminton tournament gets the thumbs up from assemblyman

The players in the boys’ Under-16 doubles showing good sportsmanship after a hard-fought match.

RAWANG assemblyman Gan Pei Nei will recommend to the state that all state constituencies have a badminton tournament and emulate the Rawang Open.

She said the Rawang Open, which is in its sixth year, had attracted international participants from as far as India and Kuwait in addition to Malaysian players from states such as Johor, Negri Sembilan and Perak.

“Certainly, with a record breaking feat of 350 participants taking part this year, this tournament has grown by leaps and bounds.

“It is not organised by professional tournament organisers but by teachers and those in other sectors such as police officers, businessmen, clerks and corporate figures with dedication to helping the sport be recognised here and unearth junior talents here. This is something close to their heart. 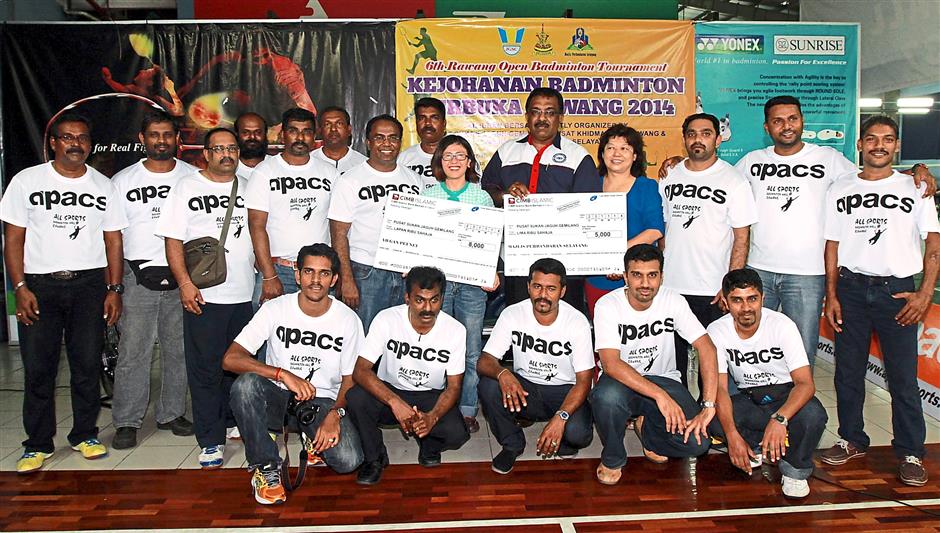 “I have been supporting the cause since the tournament started and have certainly seen it grow.

“I will recommend to the state that there be a tournament like this in every constituency supporting local talent and there can be more junior players being unearthed from tournaments like this,’’ said Gan, who presented RM8,000 for the tournament and gave away prizes to the winners at Dewan Badminton ASB, Bandar Baru Rawang, recently. 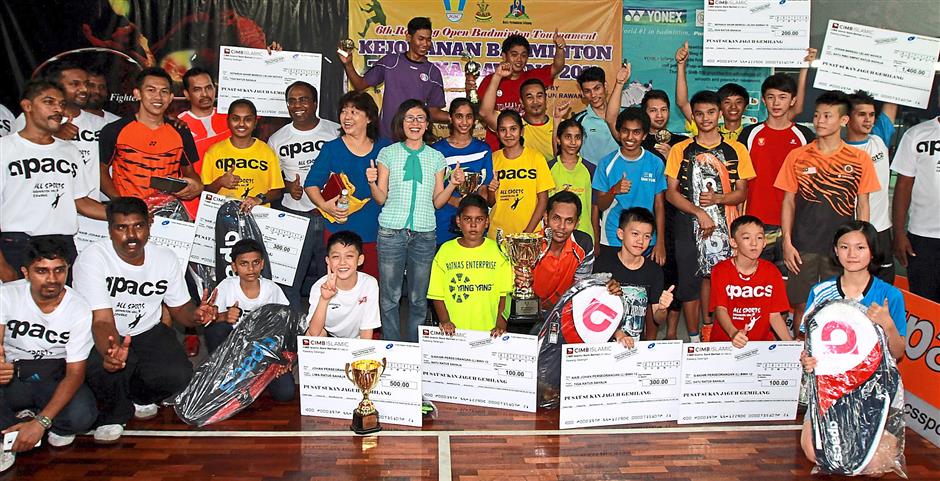 Gan with the winners in the respective categories with their prizes.

Tournament organising chairman Jeyaseelan A. Anthony said he was pleased with the encouraging words from players and parents who commended the organising committee for a well organised tournament.

“It is a big boost for the organisers to see the tournament growing and the standard of players being very competitive this year.

“There will be scouts looking out for young players with potential in the Under-12, Under-14 and Under-16 categories. 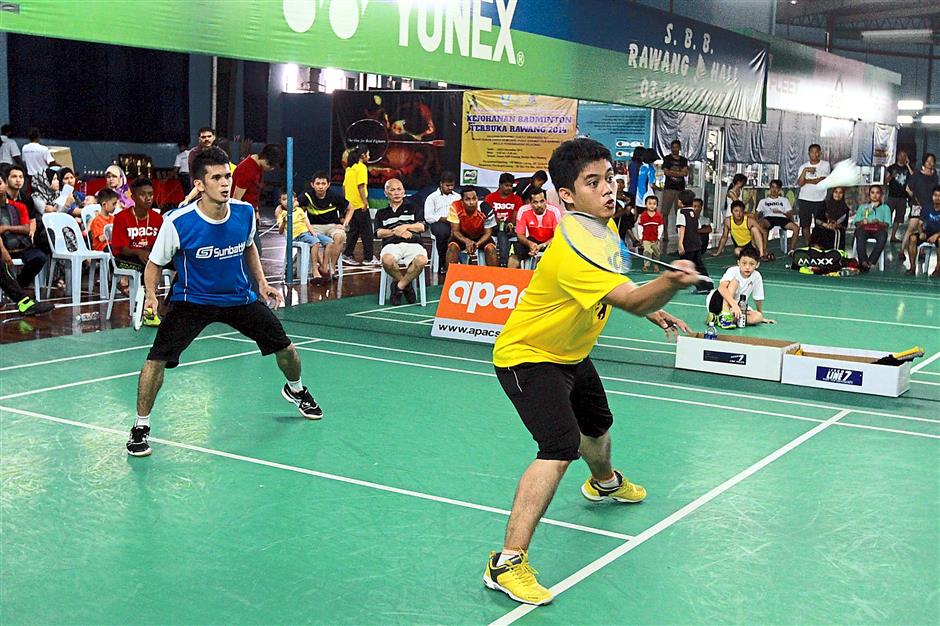 Abdul Hafiz (right) showing his skills while his partner Mohd Lutfi looks on during the novice doubles event final.

“Those picked would go on to represent the Gombak District in the Selangor Schools Sports Council badminton tournament.

“We will choose the potential players for centralised training sessions held at a school here.

“From there, we will pick them to represent the district in the Malaysian Schools Sport Council meet next year,’’ said Jeyaseelan, who added that a total prize money of RM10,800 was allocated for the tournament. 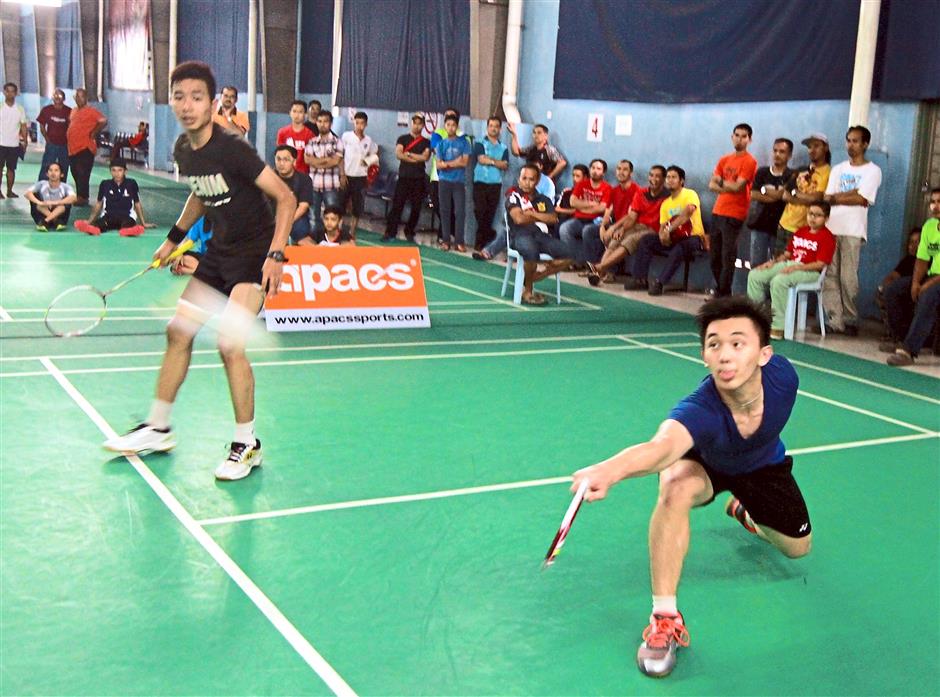 Zi Heng (right) retrieving the shuttlecock while his partner looks on during the finals of the boys’ Under-16 doubles. They beat Umar Al Qhattab-Asmawi Udin 21-17,19-21, 22-20 to emerge champions.

He added that what the organising committee gets in terms of funding is given back to the players in the form of prize money and that qualifiers in the quarter-finals and semifinal stages were also given cash incentives, trophies and sponsored products like badminton racquets and racquet bags.

Kasturi Radhakrishnan outclassed Darshana Haridass 21-16, 21-8 in the girls’ Under-16 singles final to emerge winner while Chong Ee Jack beat Chong Cheng Jun 21-12, 21-17 in the boys’ Under-12 singles final to clinch the title.

Both Kasturi and Ee Jack won RM500 each while second placing won win received RM300 each. 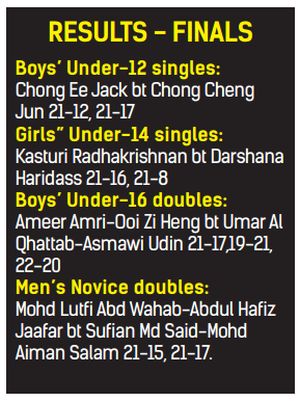