French comic artist expresses himself through stories in a different setting

KUCHING: French comic book artist Christophe Alliel, who has spent the better part of three years in Sarawak, is talking about his favourite kueh chap spot.

Bintawa Kueh Chap (which is actually at Tabuan Jaya) is his favourite, he says, flashing a grin and holding a can of lager.

I am at his house party here, held to celebrate an adopted cat’s “birthday”, and also what could have been be his last meet-up with local friends before returning to France for a book tour his publisher Le Lombard has set up. 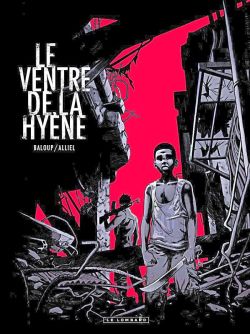 Alliel, a comic book artist who works to travel (or travels to work, more on that later), has just completed Le Ventre de la Hyène — the first comic he both co-authored and drew.

The 29-year-old Frenchman told Metro Sarawak that it was the hardest thing he had worked on and his best achievement thus far, but added that since finishing the last panel of the 120-page comic, he has tried not to think about it anymore, lest he becomes too self-critical.

Besides France, the book is also being released in Belgium and Canada.

Initial reviews from Europe have been positive.

Le Ventre de la Hyène is a story about violence, set in Africa, based on an idea Alliel had in his mid-teens, but one he only started working on earnestly while travelling in Japan when taking time out from working on other people’s projects. Alliel (left) drawing for a reader during his book tour in Europe recently.

Alliel’s journey in Asia has brought him to Singapore, Taiwan and Bali, but it is Sarawak that he keeps returning to.

There is something “cool” here and a toughness about life in the tropics that he is trying to grasp, Alliel said.

In the book’s author’s note, Alliel included a photo of Sarawak’s rainforests, even though the story is set in another continent.

“This (being here) has influenced me. It made me see things differently.

“The way I think is the way I draw, and how I express my art. Once I see things differently, I really draw differently. My art is different. I think Sarawak has been a big influence,” he said. 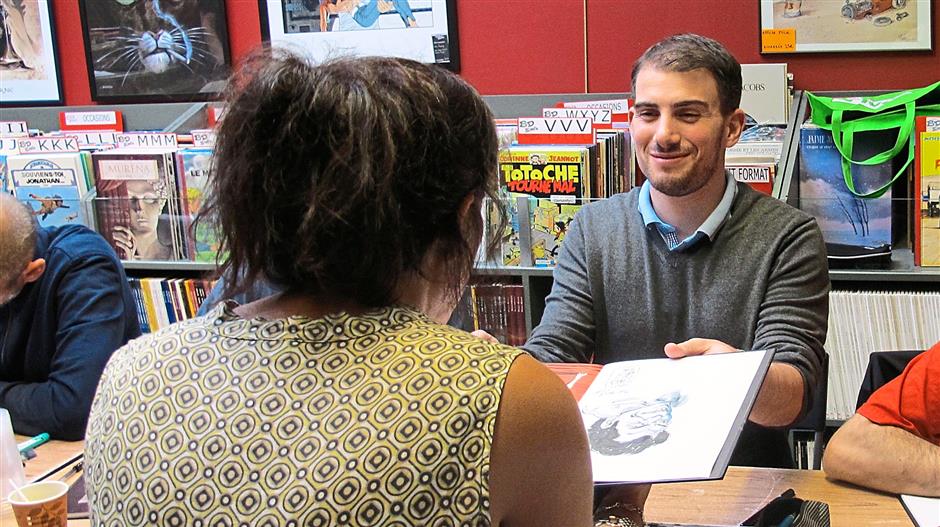 Alliel (right) presenting a drawing to a reader.

How so? Alliel spoke about drawing during excursions to the jungle, treks to waterfalls, visiting longhouses in Betong during Gawai and surfing at Sematan.

“My work became more instinctive. I don’t try to think too much about it. If I had a picture in my mind, I did it straight away. It’s faster and can be very good sometimes.

“I didn’t wait until conditions were perfect. I couldn’t wait for things like perfect lighting. Conditions are tough in Sarawak, right? So I just dealt with it. I didn’t search for an excuse.”

Alliel also said, like the characters in his book, which focuses on two brothers from their mid-teens until their 30s, he has been on a journey to see the wider world.

European society, he said, is both open and closed, liberal and conservative.

As a teenager, he grew up worshipping Japanese manga and anime.

He also saw images of the Rwanda conflict on nightly French news. Copies of Le Ventre de la Hyène on display in a bookstore in Brussels, Belgium.

“Life can be very tough. I’ve always wondered how people could live through very difficult times. Some people are born into it. It was shocking to me. I must have been 12 when I saw those images of Rwanda.

“It was unsettling to go and have dinner right after those kind of news. I had just seen kids dying on the roadside on TV. That feeling never strayed far from my thoughts.”

The French tended to talk a lot about immigration, Alliel added, but without offering his views on it, Alliel returned to the subject of his book.

“When you are young, you don’t really know the facts. But I was traumatised, not that I talked about it much. It stays inside you.

Sometimes it is too easy to move onto another subject. Today’s youths don’t even watch the news that much. How do they get the news? On Facebook?

“With this story, I didn’t want to let the readers go. I wanted them to finish the story and then think about it,” he said.

This being the first he co-authored, he is nervous about the reception. 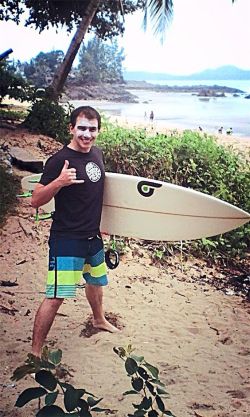 “It’s not my book anymore. People will take it and interpret for themselves,” he said.

For his next project, Alliel is returning to drawing for other people’s stories (a spy series).

For now, he said he has spent his capability to tell a deeply personal story.

To a question whether Sarawak could become the main inspiration for future works, Alliel smiled broadly and said yes.

The comments here were from several conversations with Alliel since the middle of this year.

Alliel had since made several return trips to Sarawak after his book tour ended.

“The jungles here are both beautiful and monstrous,” said Alliel, hinting that those feelings could lead to a new story.