The operation permanently shutting down an illegal scrap metal yard in Taman Emas that is sitting on Drainage and Irrigation Department (DID) reserve land, with the help of the Petaling District Land Office and Petaling Jaya City Council (MBPJ). The scrap yard, situated on a land area of approximately 350 sq ft in size, was demolished to prevent the collectors from returning.

AN ILLEGAL scrap metal yard operating on government reserve land near Sungai Kayu Ara was shut down by the Petaling District Land Office during a special operation.

A land office spokesman told reporters during the operation, that by running a business on government land, the scrap metal dealers were committing an offence under Section 426 of the National Land Code.

Councillor Lee Suet Sen who was also involved in the operation last Thursday said MBPJ previously had carried out several operations to seize the miscellaneous items within the yard.

“The illegal scrapyard on Jalan Emas 1 in Kelana Jaya had posed a health hazard to Taman Emas residents who were residing opposite the site since 2008.

“But MBPJ did not have the authority to enforce its closure.

“Thirty to 50m of land on both sides of the river belong to the state,” said Lee.

Chan Kien Fatt, the aide to Damansara Utama assemblyman Yeo Bee Yin, said a fire had broken out in the area on March 9. 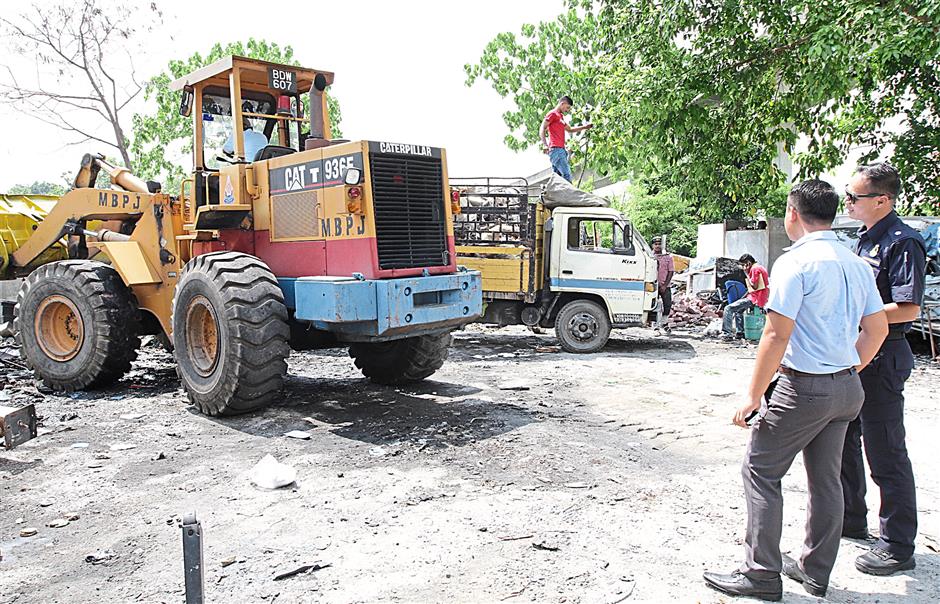 Officers from MBPJ supervising the clearing at the the scrap metal yard in Taman Emas.


“They had been burning plastic almost every night, but that night we suspected that wires were being burnt.

“The fire was so big that the Fire and Rescue Department was called to help extinguish it,” Chan said.

After negotiations, MBPJ assisted in clearing the scrap heap by loading the business proprietor’s truck using tractors and MBPJ equipment.