Toll-free alternatives from KL and PJ to Putrajaya, Klang and Rawang

Ample signages right before the Giant mall means there should be no trouble getting to the right exit. Shah Alam, 16 May 2014

IT PAYS to know some toll-free alternatives to get to several major destinations in the Klang Valley as it could save you not only money, but time as well.

As many motorists can attest, traffic in certain parts of the Damansara-Puchong Highway (LDP) and Shah Alam Expressway (Kesas) can become very congested during peak hours.

StarMetro has put together some alternatives for motorists to consider in the third and last part of a comprehensive series on the road systems criss-crossing Greater Kuala Lumpur.

The University Malaya Medical Centre (UMMC) was chosen as a starting point to explore these alternative routes because of its central location between Petaling Jaya and Kuala Lumpur. A toll-free way to Putrajaya

Starting off from UMMC, turn out on to Jalan Gasing and head to the Templer roundabout, taking the first exit on to Jalan Templer until it merges with Jalan Kelang Lama.

From Old Klang Road, turn right at the traffic lights on to Jalan Puchong (B11) and continue past the Royal Malaysian Air Force logistics camp at Kinrara on your left.

This allows commuters to bypass the LDP Sunway toll, and merge with the expressway traffic.

Commuters should look out for a split in the lanes before Bandar Puteri Puchong, as Jalan Puchong resumes right in front of the Puchong Financial Corporate Centre.

You should see the Tractors Malaysia complex and further down, the DHL warehouse on your right, and in the distance, Koi Tropika condominiums on the left.

Even if you miss the Bandar Puteri split, motorists can still take the lower ramp on the main highway as the expressway splits to exit towards Puchong Barat, and turn left at the slip-road into Jalan PPU1.

After that, a straight drive down the old road should lead one past landmarks such as the George Kent Sdn Bhd building on the right (southbound) before hitting the Lingkaran Putrajaya cloverleaf interchange.

Currently, the overhead ramp at the cloverleaf is still closed, and motorists are required to turn left to get to their destinations, with orange signboards directing traffic, accordingly.

Taking Lingkaran Putrajaya will lead you first to Cyberjaya (turn off at Persiaran Apec), before merging into Lebuh Sentosa and then onwards to the rest of the federal administrative centre.

However, do watch out for potholes and lots of heavy vehicles, as there are several housing areas coming up along both sides of Jalan Puchong.

Another alternative to Putrajaya

Motorists can also go on the Federal Highway and the East-West Link expressway from the Seputeh Interchange.

Turn off to enter the KL-Seremban Expressway, and keep left, where there is a signboard directing you to the Palace of the Golden Horses.

Going up the ramp to enter the Turf Club roundabout and doing a full circle will take you to the first turning on the left onto Persiaran Serdang Perdana.

Otherwise, you can continue a few hundred metres more and take the next left turn onto Jalan Serdang Raya.

The latter route can be a little confusing as the road can also lead back to the KL-Seremban Expressway, and you should keep right to turn onto Jalan Serdang Raya.

Continue on, past the Sri Kembangan New Village (on the right) and several other housing areas that will eventually lead to a slip-road back on to the LDP after the Puchong Selatan toll.

This enables you to merge on to the South Klang Valley Expressway and again onwards to Putrajaya.

However, given that this route stems out from the city centre, traffic is bound to be heavier, especially at the Serdang/Sri Kembangan side.

From UMMC, turn off on the Federal Highway and Jalan Syed Putra until you reach the Jalan Kinabalu roundabout in front of the Public Bank building and take the ramp up to join Jalan Kinabalu.

Going over the Jalan Parlimen roundabout in front of Menara Bank Rakyat will lead to Jalan Kuching.

A useful landmark to look out for is Plaza Sungai Mas, which appears from the far-right if heading up Jalan Kuching.

Further on, you will also go through the Batu Caves roundabout, which is also a useful route for getting to Kepong and an alternative to Selayang via Middle Ring Road 2 (MRR2).

The most straightforward way of getting to this destination is to utilise the Federal Highway towards Klang and pay RM1.10 and RM1 at the Batu Tiga and Sungai Rasau toll, respectively, exiting via the ramp on to Lebuhraya Selat Klang and turning on to Persiaran Bukit Raja 2 with a travel distance of approximately 23km.

Alternatively, utilise the North Klang Valley Expressway (NKVE) from the Damansara toll, exiting at the Bukit Raja toll for RM3 to join Lebuhraya Selat Klang before turning in to Persiaran Bukit Raja 2 with a distance of approximately 30km.

There is an alternative route that will bypass the toll plazas and clock in at roughly 27km in travel distance. However, the route will probably increase travel time and vary according to traffic conditions.

The simplest way when on Jalan Universiti and heading towards Universiti Malaya, is to turn off at Jalan Bukit 11/2 to connect with the Jalan Utara-Federal Highway interchange (Amcorp Mall).

Travel along the Federal Highway and turn off at the Subang Airport road interchange then exit on to Persiaran Kerjaya leading towards Glenmarie.

Before Glenmarie, take the left exit (Jalan Batu Tiga Lama) right after the BMW and Mini showroom, this road serves to bypass the Federal Highway Batu Tiga Toll Plaza (note that this stretch has no street lamps resulting in poor visibility at night).

The end of the road will lead to the Jalan Subang-Batu Tiga interchange and back on to the Federal Highway.

Follow the road until the end then turn left at the first set of lights by the petrol station; this will lead to another set of lights and turning right will link to the Federal Highway-Lebuhraya Selat Klang exchange, less than 500m away from the destination.

This alternative will connect to the other parts of Klang as well as Setia Alam. The earlier Jalan Kerjaya route towards Glenmarie can also serve as a bypass for those heading towards Shah Alam and Bukit Jelutong.

The simplest route to Setia City Mall is to get on the NKVE at the Damansara toll plaza and exit at the Setia Alam interchange before paying RM2.70 at the plaza, for a total travel distance of 30km.

An alternative is to use the same method for the Federal Highway tolls and carry on until the Persiaran Sultan Ibrahim interchange.

Keep left and look out for the Persiaran Sultan Ibrahim roundabout and take the third exit into Jalan Sireh and turn left into Jalan Gelugor. The road is now one-way (due to traffic flow control) and a right turn at the end of the road leads to Jalan Meru for a stretch of roughly 6km before the Setia Alam turn-off.

The turn-off itself is on the uphill ramp by the Giant Klang Sentral — follow the signs heading to Persiaran Setia Alam and shortly after the ramp, a left turn into Jalan Setia Dagang will lead to the mall.

While the route from the NKVE Damansara stretch towards Subang is usually heavily congested, the travelling distance via the Jalan Meru alternative is approximately 8km further.

As this is a major road into Klang, it can also cause travel time to increase significantly during the day because of the traffic lights at the junctions and the high volume of traffic.

Transport & Safety , alternative routes to destinations in the Klang Valley 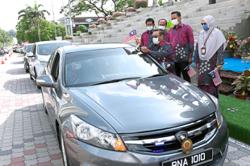 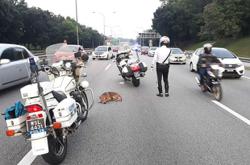 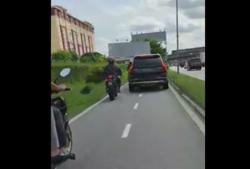