AGARWOOD syndicates are laughing their way to the bank thanks to the commodity’s popularity in shopping destinations in the Klang Valley, especially those frequented by tourists.

Bukit Bintang, for example, has become a hotbed for illegal agarwood trading, compounding the difficulty faced by authorities fighting hard to control rampant harvesting of the precious commodity in Malaysian forests.

Kiosks and shops can be seen in prominent locations in the Golden Triangle, openly displaying chunks of agarwood together with woodchips, incense and essential oil.

These outfits are mostly run by foreigners who possess normal business licences but they make no attempt to ensure the legitimacy of their supplies.

A trader said the woodchips could fetch between RM3,000 and RM5,000 per kilogramme, depending on quality. He said his company’s main store in Ampang could offer more variety and bigger volume. A photograph provided by a local conservation group showing agarwood trees in a protected forest in peninsular Malaysia, already destroyed by poachers.

The essential oil, he disclosed, was sold at between RM200 and RM400 per bottle depending on the size.

When asked where the agarwood was sourced from, he replied that it was from Kelantan and Terengganu but did not display any harvesting licence or trading permit.

The export of agarwood products is stringently controlled, and is permitted only with the necessary certificates issued by the Malaysian Timber Industry Board.

All Aquilaria species, as well as the related Gyrinops trees, have been listed in Appendix II of the Convention on International Trade in Endangered Species of Wild Fauna and Flora (CITES).

However, while the export of these endangered species is being closely watched, the domestic trade of this expensive commodity has gone under the radar.

He also admitted the department had been lenient with the domestic sale of agarwood and its products in the past, to help locals achieve economic growth. 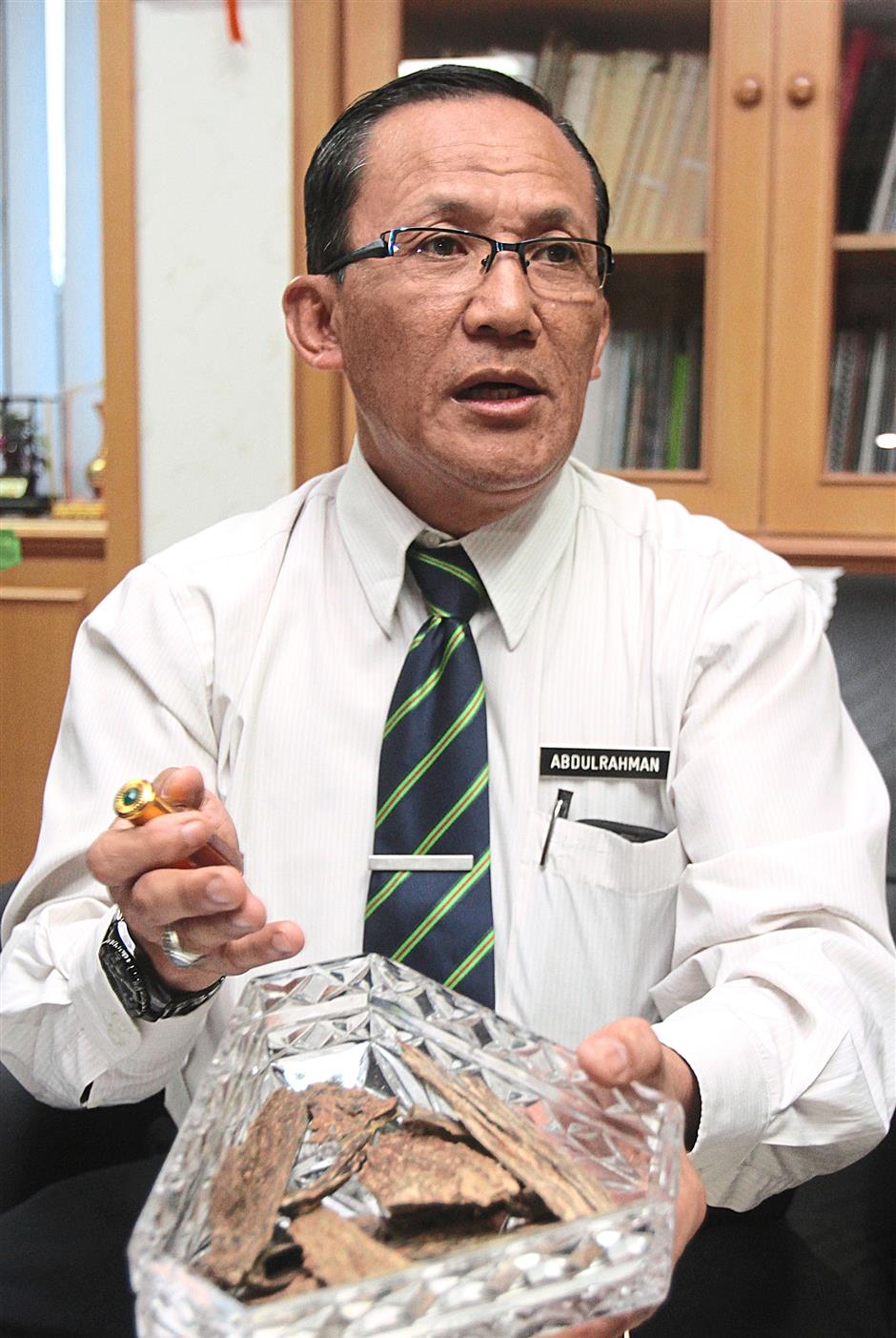 Dr Abd Rahman showing some high quality agarwood wood chips and a bottle of essential oil, which will cost around RM30,000 at the current market price.

“But it has become too rampant and we have to be stringent from now on. Enough is enough,” he said at the department’s headquarters in Kuala Lumpur.

“We believe these illegal traders have formed a cartel and the products are mostly sold to Middle Eastern tourists, on top of the large volume exported to the region,” he added.

Under Section 2 of the National Forestry Act 1984, agarwood is a forest produce when found in or brought from permanent reserved forest, state land, mining land, reserved land or alienated land.

Section 14 of the Act states that all forest produce are the property of the state authority, unless a licence is granted to remove the commodities as per Sections 19 and 40 of the Act

Also, Sections 68(1) and 84(1) state that possession of forest produce must be accompanied by legal documents that include the removal licence.

According to Dr Rahman, only one removal licence for agarwood has been issued in peninsular Malaysia, to a company in Kelantan.

Furthermore, there is a moratorium on logging and all forest produce harvesting in Selangor and no new licences had been issued since 2008.

Still, this does not seem to hamper the aggressive harvesting of wild agarwood wherever it can be found, especially by foreigners from the South-East Asian region who have started coming to our shores as the Aquilaria population dwindles in their respective countries.

Dr Rahman said Penang, Perak, Pahang and Johor were among the worst-hit states while Aquilaria trees found in the forest reserves of Selangor were also not spared.

Malaysian Nature Society, Selangor branch vice-chairman Lim Teck Wyn said unlicensed agarwood harvesting had caused as much harm to wildlife in the forests as to the trees themselves.

“The collectors hunt in order to survive for weeks in the forests. They have also killed tigers, elephants and other animals that they feel will attack them,” he said. 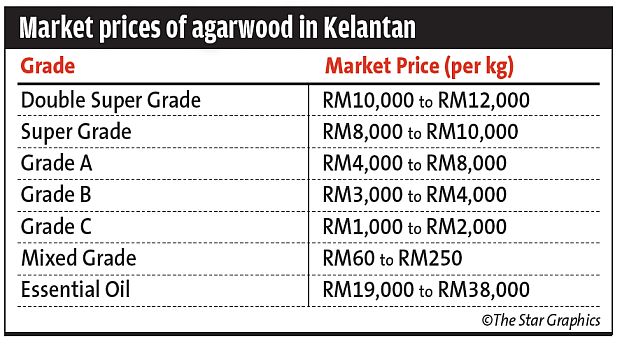 “Hundreds of foreigners have entered our forests for agarwood in the past few years, but in fact, only 10% of Aquilaria trees in the wild produce agarwood but they would have been severely damaged by the time the collectors find out,” he said.

He added that two full-grown Aquilaria trees in the Ampang Forest Reserve had been completely uprooted while the few in the Bukit Nanas Forest Reserve were also badly harmed.

“These collectors are highly skilled, they work in squadrons — staying in the forest for weeks on end to chop, chip and collect agarwood. The entire operation is like an organised crime syndicate,” said Dr Rahman.

“The foreign collectors collaborate with local middle men to pass the commodity on to traders and exporters.

“As long as the locals are involved, it is going to be difficult for us,” he said, adding that he had appealed for more manpower and funds to beef up patrolling but said the enforcement officers were unable to monitor beyond the forest reserves.

To control domestic trading, he said the department would start conducting spot checks on retailers and would require them to show the legal documents required to possess the forest produce and products.

He said failure to do so would lead to confiscation of the products.

However, no arrests have been made so far because the department’s enforcement activities have been focused on cutting off the illegal supply.

“We urge the public to help us by acting as our eyes and ears, either looking out for collectors in the forests or asking for proof of legitimacy from agarwood retailers. The retailers can help us by informing us where they source their raw materials from,” he added.

According to Dr Rahman, replanting of Aquilaria trees is being actively carried out in an attempt to make up for the loss. These trees are infected artificially to produce agarwood for commercial purposes.

Dr Rahman said currently there were 89 planters in peninsular Malaysia and the plantation area amounted to 1,928ha.

The Forestry Department has planted another 440ha of Aquilaria trees, creating a cultivation area of 2,368ha in total on private, state and reserve land to ensure sustainability of the industry.

As of 2004, there were 3.5 million standing stems of Aquilaria malaccensis trees nationwide on the inventory. The latest inventory is not ready, so the department has no idea how many stems are left now, said Dr Rahman.