THE RAINBOW IS SEEN WHEN WE ARE IN AIR TERJUN PELANGI, SUNGAI LEMBING.

THE hamlet of Sungai Lembing, once known as the El Dorado of the East, has seen a glorious past.

The moniker suggests it was a lost city of gold but in reality, the town was the centre for one of the largest tin-mining operations in history.

For the better part of the 20th century, Sungai Lembing was a boom town — its land rich in subterranean tin deposits.

The British colonialists were quick to develop the town into a major tin ore production hub to fuel the empire’s demand for raw commodities.

Spearheaded by the Pahang Consolidated Company Limited (PCCL) in the early 1900s, the operations saw the excavation of deep shaft mines that were among the largest, longest and deepest in the world. The tunnels dug deep beneath the hills were said to have reached more than 300km, while the mines went as deep as 700m.

Soon, the small settlement saw mainly Chinese immigrants being brought in by the thousands to work in the mines.

The town flourished as the British owners of the mining company began providing infrastructure such as roads, electricity, schools, bungalows, an office, warehouse, stores and even a hospital.

Sungai Lembing went on to become an important commercial centre, with its residents enjoying many luxuries of life.

Imported goods were sold duty-free at a convenience store while Malay, Hindi and English films were screened twice daily at a cinema in the middle of the town. Rainbow Waterfall, where a rainbow can be seen across the cascading waters during morning hours.

The town’s good fortune continued until the mid-1980s when world tin prices collapsed, forcing PCCL to shut down the mines at the end of its lease due to high operational costs.

The land was returned to the Pahang government and having relied heavily on tin mining for decades, the people of Sungai Lembing suddenly found themselves out of jobs.

This compelled the younger generation to leave Sungai Lembing for better prospects in Kuantan and other towns.

The town was left forgotten, its glory years merely a distant memory, until the state government decided to inject funds into developing Sungai Lembing as a tourist attraction.

Development efforts culminated in the opening of a tin mining museum in 2003. Panorama Hill allows visitors to enjoy a breathtaking view of the sunrise after a 45-minute trek.

Housed in the former residence of the PCCL general manager, the museum offers a glimpse at the tin mining industry that helped shaped the town’s history.

The latest attraction opened by the Kuantan Municipal Council is a restored section of a mine shaft that offers visitors a chance to explore by riding a trolley car into the tunnel and then continuing on foot.

A short way from this is the ever-popular Panorama Hill, where visitors can enjoy a breathtaking view of the sunrise after a 45-minute trek.

The normally deserted town comes alive during weekends when tourists pour in for a day trip to trek up the hill.

Another scenic draw is the Rainbow Waterfall, where, true to its name, a rainbow can be seen stretched over the cascading waters during morning hours.

Visitors have to use a four-wheel-drive vehicle, which can be arranged for in town. After an hour’s drive, it takes another 40 minutes of trekking to reach the waterfall. Sungai Lembing is a relatively quiet place these days. The town comes alive with tourists during the weekends.

Although far from its heyday, Sungai Lembing is now seeing a revival of sorts thanks to tourism.

The museum has also seen an increase in visitors over the years.

Ibrahim was in the town recently to accept a 25kg ingot of 99.99% tin, donated by Malaysia Smelting Corporation (MSC) Berhad, to be exhibited at the Sungai Lembing Museum.

“We want to let people know and appreciate this piece of history which shaped our industry,” he said.

Chua believed there were still plenty of unmined minerals in the East Coast and structured policies could benefit the country’s economy by unearthing these ores.

“I believe there is potential if our Government can give its commitment to looking for these deposits. Perhaps, this could even help Sungai Lembing regain its past glory,” he said. 'A good place to hide:' New Hampshire locals had no idea Jeffrey Epstein ally holed up nearby 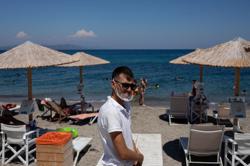 As tourists trickle back to resorts, Greeks have modest expectations