CYCLING has become the in thing in Penang, especially on the island.

More Penangites are going around on two wheels and motorists here need to come to grips with the fact that cyclists are here to stay.

“So many bicycle shops have mushroomed in the last five years, but we still have good business,” said bicycle retailer Ng Chin Eak, 70.

His shop, Syarikat Chin Aik in Carnarvon Street, has been there for 52 years.

He recalls that around 30 years ago, his clientele comprised postmen, labourers, pedlars, trishaw riders, tricycle goods carriers and the bread man.

“I was planning to retire about five years ago. All my customers disappeared with the times. Nobody wanted anything to do with bicycles.

“Then suddenly, people started coming to my shop and asking for road bikes and mountain bikes. So I started stocking them and they sold very well. I’m still planning to retire, but I don’t know when.”

These aluminium and carbon fibre wheels from Colnago, Pinarello, and Lapierre can cost between RM4,000 and RM20,000.

Cyclists in Penang can be classified under several categories with “hill takers” being the most common.

They only use mountain bikes and are anatomically characterised by ropy tendons and muscles that bulge out of their calves and thighs. These muscles are the result of their constant struggle to ride up Penang Hill, among others. Their favourite training ground is Pearl Hill in Tanjung Bungah. 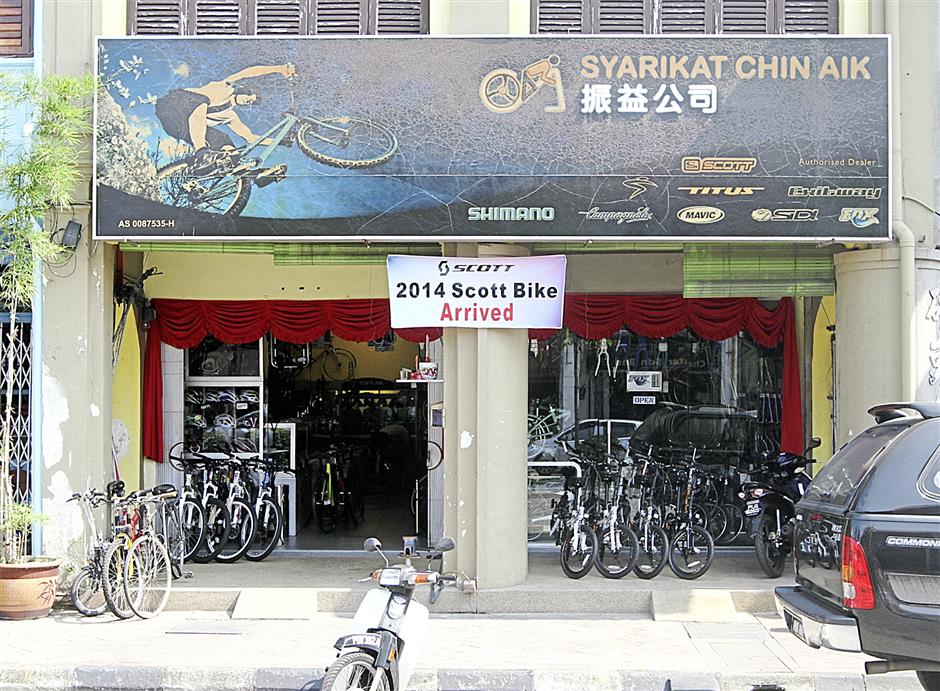 On any given evening, you will find future “hill takers” training on this 2km stretch of steep road. They do laps and attempt to finish each lap in 10 minutes or under.

Once their mentors declare them ready, they say goodbye to Pearl Hill and head to Penang Hill, Tiger Hill, Gertak Sanggul and Balik Pulau.

As a motorist, you will seldom encounter a “hill taker”, unless you are at the Air Itam market and see a troop of them heading down for assam laksa after an invigorating climb.

“Speed demons.” garbed in body-hugging lycra and special aerodynamic helmets, may look ridiculous to the uninitiated. Do not, however, underestimate their stamina.

They can cycle at speeds exceeding 35kph for hours.

Cycling around the island involves 82km of asphalt. The fastest speed demon does it in less than two hours, making his average speed 40kph or more.

There are not many of them here though because Penang lacks the straight stretches of road necessary for speed demons to find their second wind.

“Recreational cyclists” usually purchase folding bikes which only measure about 2 sq ft and can fit into most cars. Ng posing with one of his more expensive bicycles.- Photo of CHARLES MARIASOOSAY AND ARNOLD LOH

There are also many recreational cyclists at Straits Quay, as the management has allowed everyone to cycle along the marina.

“These kind of cyclists are at a crossroad. If they don’t find joy in new challenges, their bikes usually end up in the storeroom once they get bored,” said G Club Penang cyclist Ronnie Tan.

G Club played a pivotal role in driving the cycling movement in Penang and organised the first round-island cycling event. In 2008, 750 cyclists went around the island. Next month, 4,500 cyclists are expected to take part in this annual event.

“Cycling tourists can be seen riding around the island looking for murals in George Town’s heritage enclave, especially on weekends.

They become exhausted and dehydrated easily as they are unused to our weather - often resulting in an impaired sense of spatial judgment.

They usually rent vintage bicycles and can be spotted wearing casual clothes.

“Bike commuters” cycle to work, market and anywhere else. They have lost their fear of cars, buses and lorries roaring down the road.

“I have no fear of cars with Penang licence plates. They are used to my presence and slow down for me,” said retail trainee executive Simone Loh, 23.

Loh works at a bookstore in Gurney Plaza. She cycles 7km from Dato Keramat Road to get to work.

“On weekends though, when lots of outstation cars are on the island, I am more wary.

”Loh said she has been cycling since her university days and when she found work in Gurney Plaza, cycling seemed an excellent way to keep her living costs down.

Engineer Alan Tan rides from Tanjung Bungah to Bukit Tengah on the mainland every day to work — a distance of over 50km, including the ferry trip.

“It’s nothing. Cycling to work cuts my transportation costs and I stay fit without spending money on gyms,” smiled Tan, adding that he can reach Bukit Tengah in about an hour.

There are many more ‘sub-cultures’ of cyclists in Penang. Some use full suspension bikes and wear knee-high boots and climb Penang Hill on earthen trails in the dead of the night with the aid of LED spotlights.

There are also thousands of foreign workers who go to work on bicycles.

To accommodate the new cycling culture, the state government is creating bicycle lanes and putting up signs to remind motorists that cyclists share the road. Penang, as they say, is a bicycle state. Drive slowly.