DEVELOPERS, especially those born and bred in Ipoh, have been called upon to make the city a unique place to live in. Perak Mentri Besar Datuk Seri Dr Zambry Abd Kadir said he wants to see Ipoh city being developed into a special place that people would want to come and live in and urged local developers to assist the state in realising this.

“We need passion, not just vision. We want Ipoh to be developed with the human touch, and we want to see the city green and clean,” he said during the launching of MH Groups corporate logo at the MH Hotel in Ipoh on Saturday.

Dr Zambry cited the city of Surakarta or Solo in Indonesia, which under its former mayor Joko Widodo, had flourished into a beautiful city and one of the top cities of the country.

“Jokowi (Joko) was a leader who used humanism when he set out to develop the city.

“He goes down to the ground, gets in touch with the people and found out what was needed to build the city,” he said.

“There are not many leaders in the country who do that,” he said, adding that he hoped the major players and captains in the development and building industries here in Ipoh could also do the same.

“I also hope that Ipoh and the other districts could be developed as planned under the Perak Amanjaya development blueprint,” he added.

In his speech, MH Group director Cheng Heng Keong said they were looking into introducing a new concept for commercial properties in Ipoh.

“We are looking into the SOVO (small office versatile office) concept, which is the latest development trend in the country. 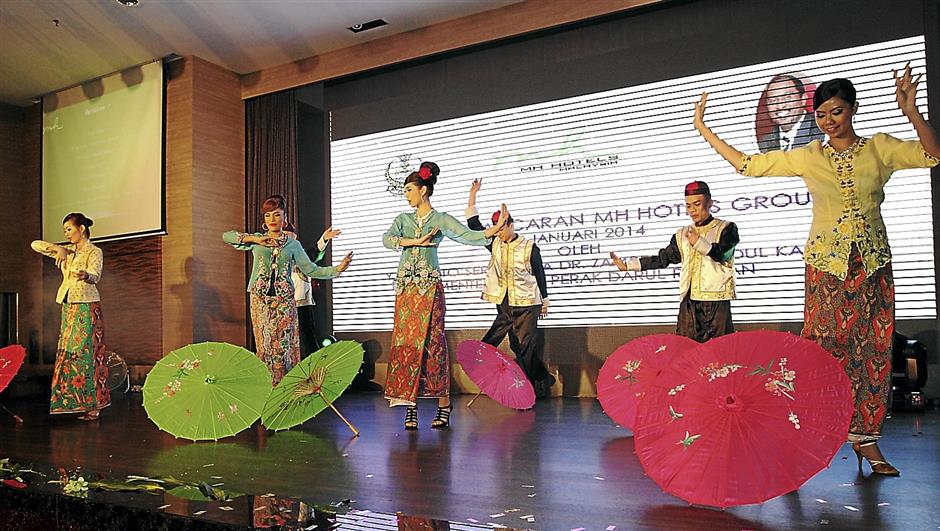 A song and dance performance during the launch. – Photos by RONNIE CHIN

“This concept includes premises with pre-installed telecommunication and infrastructure facilities and is suitable for young entrepreneurs,” he said.

He also said that it was their desire to see greater development in the city, with iconic and high-rise buildings.

“One of our upcoming projects is ‘The Cube in Tambun’. It is a unique architectural and contemporary designed semi-detached suites,” he said.