TODAY is a day of reckoning on two fronts for folks in Kuala Lumpur. It is the final day for them to submit letters of objection against the proposed assessment increase and this is also the day of the scheduled water supply cut that may leave some city denizens without water for the next few days.

The masses who turned up at Kuala Lumpur City Hall headquarters in Jalan Raja Laut yesterday to hand over their objection letters, also took the opportunity to complain about the impending water disruption that would affect an estimated million residents in the Klang Valley.

The disgruntled crowd, bearing placards and banners listing the increase in electricity tariff as well as petrol and sugar prices, shouted for the resignation of Kuala Lumpur mayor Datuk Seri Ahmad Phesal Talib and for the Government to abolish other increases. 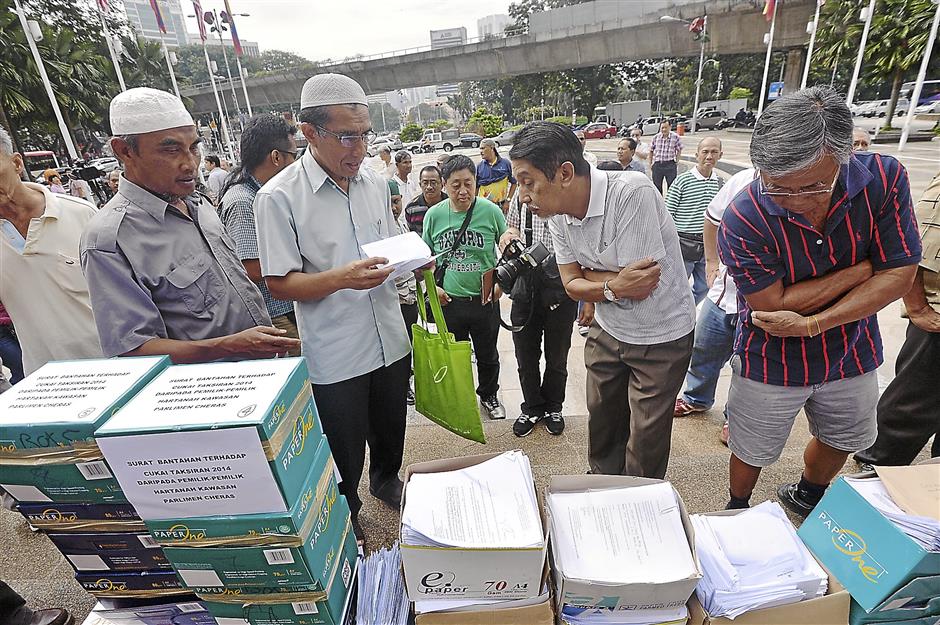 Opposing the hike: Citizens dropping off their objection letters at Dataran DBKL.

“We are here to protest our unhappiness over the assessment hike and all other increments,” said Yao Lay Jin.

“As you can clearly see, most of us here are seniors citizens and pensioners. We are seriously affected by the hike in assessment charges,” he added.

“I hope DBKL hears and understands our plight and will reconsider by cancelling the assessment increase. This is too much,” said Lee Kar Yean, a resident in Segambut.

Bukit OUG Condominium RA vice-president Charles Ho and his wife Jenny, both in their 70s, said 40% of the residents at the condominium were seniors citizens.

“These people owe some RM4mil in management fees as it is. The monthly RM168 to RM250 is already a burden, how can you expect them to pay the new assessment rates?” griped Charles.

Taman Bukit Angkasa resident Suriyati Hussein, 50, said she wished that DBKL would realise that the proposed hike would increase the people’s burden.

“It is especially unfair to residents living in low-cost flats as we earn minimum wages. Where do they expect us to get extra money?

“I am here today as it is my duty to make sure the authorities know that we strongly object to them arbitrarily increasing assessment charges without prior consultation,” she added.

“I make only RM2,500 a month. I have five children to feed and with this hike, it is simply too much for us,” said the Cheras resident who is currently operating his own business.

Restaurant owner Dorairaj Alagapan was worried that his landlord would increase his rental. Dorairaj, who runs a shop in Jalan Tunku Abdul Rahman, added that his rent had been increasing every few years.

Meanwhile, many who turned out also took the opportunity to get up close and personal with their MPs. A resident from Pantai Dalam came to pass her daughter’s wedding card to Lembah Pantai MP, Nurul Izzah Anwar.

Many took the chance to pose and take pictures with their favourite MPs. Batu MP Tian Chua, Segambut MP Lim Lip Eng and Nurul Izzah were clear favourites among city residents who queued to snap photos with them.

The gathering started at 10.30am and lasted until noon.

At 11am, there was much jostling when Ahmad Phesal showed up briefly to speak to the MPs before leaving for another event.

The residents who arrived later, numbering in the hundreds, then flooded the DBKL lobby and shouted for the mayor to come down again to take the bulk of objection letters.

The situation became a little tense as soon as the MPs dispersed, fuelled by loud rantings of some individuals outside the City Hall building, but DBKL enforcement officers were present to keep the situation calm.