Comfort and safety features among reasons why passengers like ETS

THE Electric Train Service (ETS) to and from Ipoh and Kuala Lumpur is a more popular mode of transport for Ipoh folk.

A check by The Star revealed that the speed of the train and its safety features were among reasons for it to be preferred to the express bus.

One frequent traveller who gave the thumbs up to the service was Ipoh Barat MCA division chief Datuk Tan Chin Meng.

Tan travelled to the MCA headquarters in Kuala Lumpur for meetings at least twice a week.

“I do not pay for petrol or toll that could come up to about RM150 for each trip,” he said, adding that the two-way train fare was only RM70.

“I also do not have to worry of being caught in a traffic jam using the ETS,” he said.

Upon arrival at the KL Sentral station, he said he would take the Light Railway Transit to get to the party headquarters in Jalan Ampang. Relaxing: The waiting area at the Ipoh Railway station is clean.

Tan, who is also the MCA national organising secretary, expressed his surprise that a few China businessmen, whom he met recently, had also learned to take the ETS to Kuala Lumpur.

“They were all praise for the service as it saved them the hassle of chartering a car,” he said.

Ipoh Barat MP M. Kulasegaran, who is another frequent ETS user, said travelling in the train had enabled him to get to know other passengers, especially his constituents.

“It is one of the best ways to get to know ordinary folk and every time I travel, I would get to see new faces.

“It gives me an opportunity to mingle on current issues and with those who are interested in politics,” he said.

Kulasegaran said he would travel to Kuala Lumpur by train at least six or seven times a month to attend parliamentary sitting and to settle legal and party matters.

Throughout the two-hour journey, he said he would also study the materials and prepare documents that would be used in his meetings.

Kulasegaran added that he had been an advocate for people to use the public transportation.

“Back in the 70s, when I was studying in London, people from all walks of life used the train, which was the most convenient and cheapest mode of transport,” he said.

He suggested that KTMB reduced the ETS fare to benefit a larger part of the society. 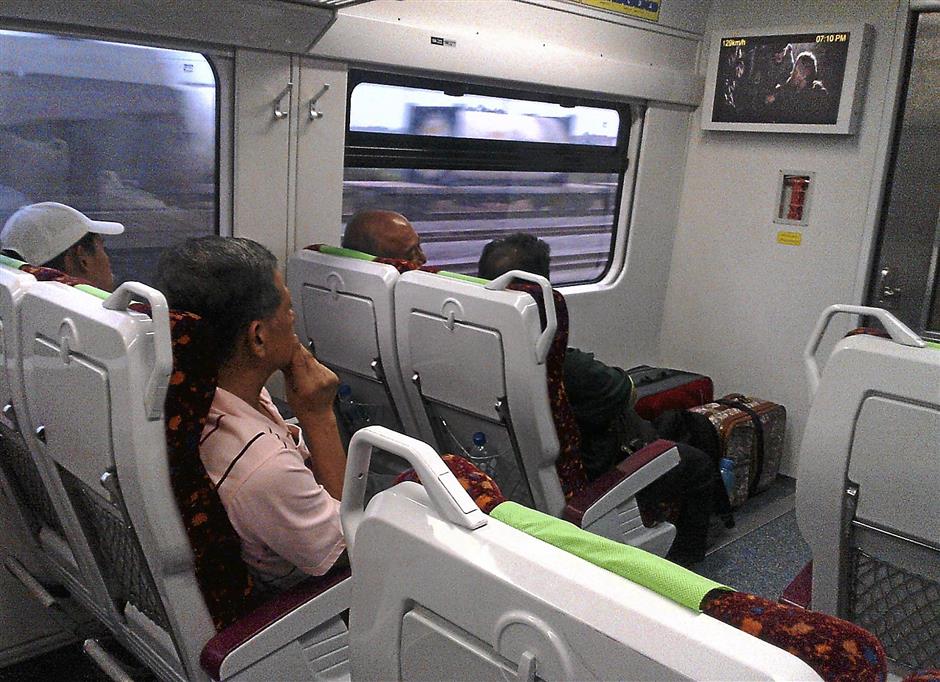 Cool comfort: ETS passengers watching a movie on a two-hour journey from Ipoh to Kuala Lumpur.

Bercham assemblyman Cheong Chee Khing said he would bring his constituents to Putrajaya and Kuala Lumpur to solve problems at various governmental departments at least once a month.

The train, he said, departed and arrived at stations at the scheduled time.

“Thanks to the short travelling time, we are able to return to Ipoh in the evening,” he said, adding that they would normally depart in the morning.

“We always use the service to attend book fairs or exhibitions in Kuala Lumpur,” he said.

Magazine writer Rachael Soh, 24, said it was safer to travel in train than the express bus which was often involved in fatal road accidents.

“I do not mind paying more for a safer mode of transport like the ETS,” she said.

She added that the train fare was also fixed and passengers cannot get cheated unlike express bus fares which are sometimes increased by unscrupulous bus ticket sellers.

Soh, who works in Kuala Lumpur, said she returned to her hometown in Taiping once in a few months.

“Since Ipoh is the final stop for the ETS, I have to get down at the Ipoh Railway station and take a local bus to continue my journey up north.

“It would be much more convenient if the service is extended to Taiping and to other destinations up north,” she said.

Nur Miliana Tok Kagus, 48, had been commuting between Ipoh and Kuala Lumpur by train ever since the ETS was introduced about three years ago.

“I do not need to worry about getting stuck in the traffic in Kuala Lumpur during the peak hours,” she said, adding that the train journey was only two hours long compared to the over three hours by express bus. 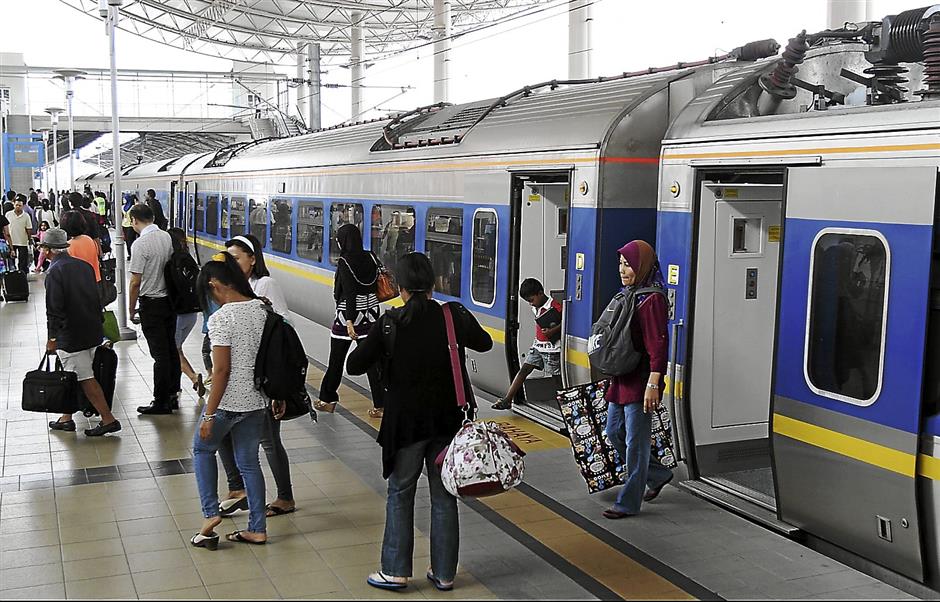 It’s been an easy ride: Passengers alighting the train that had arrived from Kuala Lumpur.

The seats on the train were also larger than those on the express bus, added Nur Miliana, a government servant.

“It even has a special platform for passengers to place their laptop,” she said.

Roselaza Yaakub, 41, said she would also opt to take the train if she and her family did not drive down to Kuala Lumpur.

She said it was easier to get to the railway stations in Ipoh and KL Sentral that were located in the city centre.

However, she said the lower income group were discouraged to take the train due to the fare that was higher than the express bus fare.

Meanwhile, Mohd Safwan Omar, 21, who travelled frequently to Penang, suggested that the ETS is introduced to that destination as now there was only inter-city trains available.

“The intercity trains stop at almost every station to pick up and drop passengers,” he said.

Travelling to Penang by buses, he said, would take not more than three hours whereas trains, especially the midnight ones, could take about four hours.

ETS trains made a total of 18 northbound and southbound trips between Ipoh and Kuala Lumpur each day.

He said there was a visible increase of 20% in the number of passengers for the ETS and intercity service in the first six months of the year compared to the same period last year.

He said ETS was priced between RM25 and RM35, depending on the time the train departed.

Mohd Noordin said discounted train fares were offered to senior citizens aged 60 years old and above (50%), children aged 11 years and below (50%) and undergraduates who applied for KTM’s student card (25%).

The increasing population in Ipoh following the rapid development in the city and its suburbs had also increased the number of ETS and KTM intercity train users, he said.

*Tomorrow read how the ETS helps in family bonding. 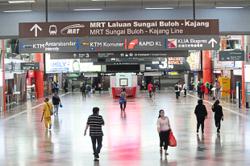