Detailed attention on Nyonya outfits pays off for participants in contest 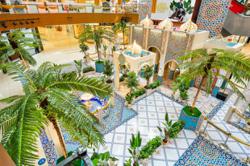 The seven-year-old, strutted around purposefully in a koon (formal gown) and serenaded the crowd with ‘Dondang Sayang’ and ‘Chan Mali Chan’, brushing aside the challenge of a dozen other hopefuls to take home prizes worth RM900.

Her mother Shereen Ong, 39, a programme manager who is part Peranakan, revealed that they got most of Joey’s attire and accessories from relatives back in their hometown of Malacca, while her grandmother handmade her a sanggul.

“When you think of the Nyonyas, the first thing that comes to mind is the kebaya. So we decided to showcase the koon instead.

“It has been an enlightening experience for her. She has been asking lots of questions about Peranakan practices and customs, and it’s great that she is learning more about her roots,” Ong said after the contest recently.

She also hopes that both Penang and Malacca, the two bastions of the Peranakan community, would do more to promote the unique culture, as she feels recognition of it is still lacking if compared to Singapore.

Seven-year-old Belinda Yau Xin Yee grabbed second place after parading in a similar, koon-like costume, that mother Tan Siew Lek, 40, handmade based on images she found on the Internet.

Belinda, who was rewarded with prizes worth RM700, proved an equally talented contender singing the evergreen numbers ‘Rasa Sayang’ and ‘Lenggang Kangkung’, with improvised lyrics to suit the occasion.

“I used cheongsam fabric to make her outfit. We had been searching for ideas for this contest since two months ago, though it was a little hard as not many people know about the Peranakan culture in detail.

“While helping her prepare for this contest, I’ve also learnt many things that I didn’t know. It has been educational for both of us,” Tan said.

Shermin Seow Yi Xuan, 10, who paraded in an elegant green kebaya fastened with kerongsang (brooches), and performed a Malaccan Nyonya Dance, rounded off the top three.

She also claimed the Most Photogenic Award.

“Though I knew a little bit about the Babas and Nyonyas previously, this contest allowed me to learn more about their culture, and have a better appreciation of it.

“The kebaya is a very beautiful attire, it makes me feel elegant and pretty,” said Shermin whose total haul of prizes was worth RM780.

Michelle Ooi Le Xuan, nine, and Michelle Chan Hann Yee, six, who performed a dance and poetry recital respectively, both finished with consolation prizes, though the former also bagged the Most Talented Award.

The Evergreen Nyonyas group also had shoppers swaying when they performed a medley of music and dance numbers, drawing rapturous and appreciative applause.

The contest was part of the mall’s The Glorious Heritage activities for July, organised in conjunction with the anniversary celebrations of George Town’s inscription as a Unesco World Heritage site.

Homage to culture of Peranakans 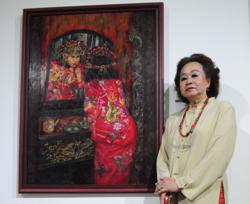