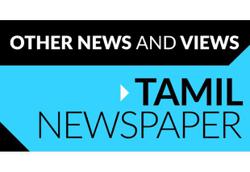 A SPECIAL needs student scored 6As among the 478 candidates from SMJK(C) Chung Ling Butterworth who sat for the SPM examination last year.

Hong Qi scored A- for English and Physics, A+ for Moral Education, Mathematics and Additional Mathematics, A for History, B for Bahasa Malaysia and Chinese Language and B+ for Chemistry and Biology.

“I obtained similar results for the trial examination, and expected the same results in my SPM,” said the lad when interviewed at the school yesterday.

The eldest of three, who wants to be a scientist, said he always studied consistently, and was motivated by his parents and teachers.

Nur Afifah Elias from Sungai Petani, Kedah, who was the only Malay candidate at the school to score 9As and 1B, said she felt a little pressured to excel partly because her parents were retired teachers.

“My ambition is to be a pharmacist but my parents want me to be a teacher like them,” said Nur Afifah.

She said she studied with her friends in the library every day and discussed topics that were complicated.

Saw Yean Ting, who scored A+ in all 11 subjects, said she was shocked when the results were announced.

She said she started revision about a month before the examination and watched television when she was bored.

“The formula for my success is concentrating in class when the teacher is teaching, and completing the homework without fail,” said Yean Ting.

Tan Pheng Chew, who scored 10As, wants to be a lawyer to fight for justice.

“I studied consistently in class, and sought advice from teachers in difficult subjects,” he said.

Jit Sin High School Bukit Mertajam produced eight students with the excellent 10A+ result, among them was Tan Si Yan, who had consistently been the top student in her form every year.

The demure Si Yan also played table tennis often and was involved in the school’s Bomba Cadet to strike a balance.

“So, getting 10A+ is actually quite a pleasant surprise,” said Si Yan, who avoids studying at the last moment.

Fellow 10A+ scorer Teong Ling Xin said she too was involved in the school’s Youth Cadet, and regularly played badminton to stay fit.

His classmate Tan Chun Chuan said he often locked himself in the room to do his revision as he concentrated better in a quiet environment.

Loo Kai Hui said she hoped to become a psychologist to help people cope with mental stress problems. All three also scored 10A+.

School principal Tan Kim Tong said this was the second consecutive year that the school emerged top school for SPM in the state.

“This is the best present for me as I will be retiring in three months’ time, after serving in this school for 27 years including seven years as the principal,” he said.

And scoring straight As in the SPM has brought the SMK Datuk Onn Butterworth student a step closer to realising his dream.

Weng Pong, who scored 9A+, said his mother Nittaya Loong had been taking medication and having monthly blood tests for five years.

Also scoring 9A+ were Sharvin Ganason and Ng Wei Yee.

Chan Sou Men, who scored 10A+, said students should be determined to achieve their dreams, noting that she too hoped to get a scholarship to study medicine.

Elora Ch’ng Pei Ying said she owed her success to her schoolteachers and classmates, who provided able guidance.

Their classmate Pralhlad Arumugam, who also scored 10A+ said he often played football with friends to unwind from being glued to his books, adding that he hoped to become an engineer. 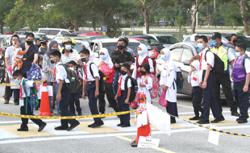 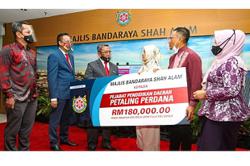