Sungai Bintangor, which is supposed to be a model river, is still badly polluted

SUNGAI Bintangor, a tributary of Sungai Sarawak which meanders through the city in the busy Satok area, used to be an ugly duckling.

Polluted and unslightly, this waterway went through a major transformation under the river rehabilitation programme a few years ago and is now a scenic place.

He plans to promote the river together with Sarawak River as an ideal place for tourism, like in Venice.

However, looks alone can be deceiving. Let’s look beyond the river’s beautiful landscape.

According to the Natural Resources and Environment Board’s (NREB) Sarawak Annual Water Quality Report 2002, Sungai Bintangor was stated as heavily polluted by organic matter and bacteria.

The pollution is so severe that fish populations are likely to be harmed by low oxygen and toxic levels of ammonia while the degradation of organic matter causes offensive odours.

Under the National Water Quality Standards for Malaysia, the classification of dissolved oxygen (DO) in Sungai Bintangor is Class IV, ammoniacal nitrogen (NH) is Class V, BOD is Class IV, faecal coliform count (FCC) is Class V and total suspended solids (TSS) is Class I.

In 2009, NREB reported that Sungai Bintangor was still polluted and categorised as a Class IV river.

In terms of DO, it is classified Class IV, NH Class V, BOD Class V, FCC Class IV and TSS Class I.

The water quality of Sungai Bintangor remains the same with little improvement, despite the river rehabilitation programme.

Looking at Sungai Bintangor, which is supposed to be a model river, one wonders how effective our programmes to conserve and rehabilitate rivers will be.

If one carefully examines the NREB’s and Environment Department’s annual reports, the water quality of the majority of rivers remain the same if not worse.

So, what went wrong?

One was whether the government had plans to elevate the status of some rivers in the city from Class IV to III and from Class III to Class II.

Another was on the effectiveness of our river conservation and rehabilitation programmes.

The questions, however, were not answered.

Everyone needs to be proactive in taking care of the well-being of our rivers instead of depending on the authorities.

But if public awareness programmes are not yielding results after a decade, isn’t it time for the policymakers to change the present approach?

If stringent enforcement and hefty fines can prevent indiscriminate dumping into rivers — be it household, construction and scheduled waste — why not implement them?

If using biodegradeable or environment-friendly products in homes can help improve water quality, why not make it mandatory for everyone to sell and buy such products?

If grease and waste traps are effective, why not install them in all households and commercial premises, both new and old, instead of only at selected places?

The state’s mega sewage treatment project in Kuching is commendable, and hopefully, the rivers in the state capital will be better in the next few years.

While waiting for similar statewide projects, it will be wise to invest in and implement inexpensive methods of improving the rivers before they become terminally ill or dead.

Will it be wise for Sarawak to spend billions of ringgit on reviving dead rivers, like in the River of Life project to revitalise dirty rivers in Kuala Lumpur, when it can do something now to prevent the death of rivers in the years to come.

If we treat our rivers with respect, they will reward us in many ways. 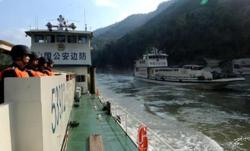