Korean students get a taste of life in Miri

A GROUP of 30 secondary students from Imgok Middle School, Seoul, South Korea had an eye-opening stay in Miri recently.

The students, aged between 12 and 15, were in the city on an educational, social and cultural tour under a sister programme with Miri’s SMK St Joseph.

They arrived in Miri last Saturday and will leave for home on Aug 1.

During their three-week stay, the students are putting up with foster parents provided by SMK St Joseph’s Parent-Teacher Association.

Kwon said the programme has been beneficial to the students as they were not only exposed to the social and cultural richness of Miri and its people but they were improving their command of English.

Lai reciprocated by saying that the students could be the future ambassadors for Miri by sharing their experiences and stories about Miri with family and friends back in Korea.

“I hope more students can come to Miri under this sister programme,” he added.

The educational homestay style tour was facilitated under the Ministry of Education.

The Korean students held a “Korean Day” at SMK St Joseph’s hall yesterday where Korean food, arts and crafts were displayed to the public. 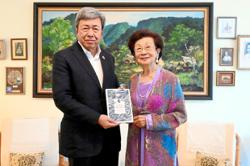