WORK for the proposed amenities for the Seri Semarak and Sungai Bonus low cost flats in Air Panas, Setapak will begin soon.

The amenities proposed by Setiawangsa MP Datuk Seri Zulhasnan Rafique, during his tenure as Federal Territories Minister, was aimed at providing better lifestyle for the residents.

“The DBKL has made several adjustments to the plan. However, most of what has been planned will be carried out,” he said during a buka puasa function with the residents of Sungai Bonus flats onTuesday.

Fuad, who was at the event, said he would look into the issue as soon as possible as it would benefit the people.

“Not many flats are lucky to have so much land adjacent to their homes. With these excess lands we plan to make the Neighbourhood Park first as the hoardings are already up,” Fuad added.

The park will consist of a surau, playground for the children and a joggers’ lane. The DBKL also plans to build a multi-storey car park, community hall, a sports complex and a futsal court.

During the buka puasa event, more than 300 poor people, the disabled, single mothers and orphans were given goodie bags and duit raya.

The event which cost RM55,000 was sponsored by Amal Wangsa Foundation and philantrophist Datuk Ismail Mohamed who is also the managing director of DPS Bristol (M) Sdn Bhd. Ismail who donated RM35,000, said this was his yearly activity and Sg Bonus is the fifth location for this year.

“It is all about sharing and that is why I prefer carrying out charity events for the needy regardless of race, age or religion,” Ismail said. 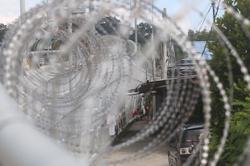