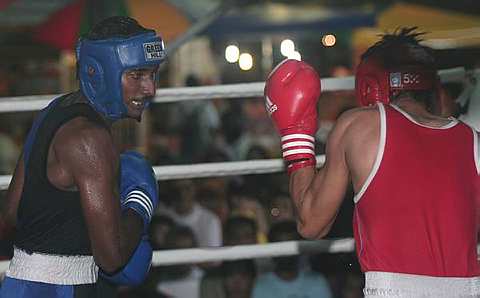 ESWARAN Murali knew he was shouldering a heavy responsibility when he stepped into the ring for the Penang Pesta International Boxing Championship 2008 64kg category final at the Sungai Nibong Pesta Site on Sunday.

As the lone Penang boxer to have made it into a final, it was up to Eswaran to ensure that the hundreds of Penangites who turned up to watch the event did not go home disappointed.

And the 21-year-old Royal Malaysian Air Force commando lived up to his reputation as the pre-tournament favourite.

Eswaran outscored his opponent Mohd Faizal Yahadin of Police (PDRM) to make it a hattrick of triumphs in the Penang Pesta series.

Despite taking a cautious approach in the opening two rounds of the bout, the Penangite scored enough points to open up a commandable lead.

His victory was all but secured in the third round when a right hook brought Mohd Faizal down on his knees.

Although Mohd Faizal tried in vain to reduce the deficit in the fourth and final round of the bout, the damage was already done and Eswaran hung on for victory.

The Sungai Pinang-born boxer earned his first Pesta gold medal in 2006 in the 60kg category, and got his second victory after moving up to the 64kg category last year.

“It feels good to give the home fans something to cheer about. It would have been disastrous if Penang did not manage to win a single title in a tournament being staged in our own backyard.

“I am also pleased with myself for clinching a hat-trick of victories in the championship. It is the perfect gift to celebrate my recent inclusion into the national team,” said a beaming Eswaran.

He dedicated his victory to state head coach Johnny Kasiran, who has been coaching Eswaran for the past five years.

Eswaran is now looking forward to consolidating his position in the national squad and earning the right to represent Malaysia in the 2009 South East Asian Games in Laos next December.

“Since I am still new in the national team, I will not set a lofty target for 2009.

“It will be tough to win a gold medal in Laos, but I will be happy if I can return with a medal of any colour.” he said.

Negri Sembilan were the biggest winners in the Penang Pesta Boxing Championship after their pugilists grabbed three of the nine gold medals on offer.

Jaya Raman Selvakumar (48kg) and Abdul Awadullah Adnan (57kg) then made it a satisfying outing for the Negri squad by winning their respective finals.

PDRM were headed for a disappointing outing until they ended their gold drought in the final two bouts of the night.

Tengku Sharizal Abdul Rahman pummelled Johor’s Adli Hafiaz Fauzi in the 69kg final and the referee was forced to stop the fight.

The PDRM boxer was handed a technical knockout victory.

Mohd Shazuan Mustafa then stepped into the ring for PDRM to outscore Perlis’ Mohd Fairus in the 75kg final, which was the last bout of the night.

The other winners in the tournament were Selangor’s Mohd Shahril Razni (51kg), Armed Forces’ Mohd Hazizul (60kg) and Indonesian Supriadi, who represented the Batam district, in the 54kg category.