IT is just after 11pm and it is closing time for a restaurant at Desa Sri Hartamas. Suddenly, three men with parang and sticks rushed in and started tearing the place apart, grabbing anything they could get hold of.

The restaurant owner suffered nearly RM100,000 in damages in the incident that took place last Friday.

A bakery in Desa Sri Hartamas was also hit and has suffered losses of over RM300,000 at the hands of the gangsters.

And such incidents have not ceased in Desa Sri Hartamas since 2000.

The residents and business operators of the suburb are living in fear and want the authorities to do something concrete to resolve the despicable menace. 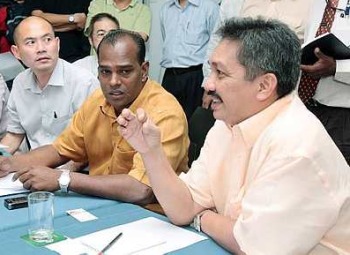 Speaking out: (Seated, from left) Lim, Saravanan and Wan Abdul Bari discussing the issue with businessowners in the area.

According to Desa Sri Hartamas Protem Committee chairman Datuk Derrick Fernandez, the thugs are demanding between RM500 and RM1,500 as protection money.

“Most of us will not give in to them because we believe in the police,” he said.

“Desa Sri Hartamas attracts a sizeable number of expatriates and we will lose business if the problems from the gangsters persists,” Fernandez said.

It is believed that there are three gangs operating in the area, striking fear into the community.

Fernandez said that the lack of a police station in the area might be a major reason the gangs were so daring.

According to Segambut MP Lim Lip Eng, there is a designated plot of land next to the fire station in Desa Sri Hartamas for a police beat.

“The plot of land is there, however, there is a food court occupying the spot now. I don’t know how that has happened but I will look into the matter,” he said.

Lim was invited by Saravanan to join the discussion.

The nearest police station is located in Plaza Mont Kiara and the shop owners have requested for police patrol on foot.

“It would be really great if a few police officers are seen walking around the area,” Fernandez said.

Brickfields OCPD ACP Wan Abdul Bari Wan Abdul Khalid said that he would do all he could to help the residents and shop operators.

“It is very difficult to catch the criminals in the act but we can use preventive laws to stop them,” Bari said.

He requested that a date be set for the police to record statements from residents and shop operators who had been extorted.

Saravanan assured the residents and shop owners that the Kuala Lumpur City Hall (DBKL) would consider beefing up security measures such as installing more street lights and security cameras in the area.

He also said that he would address the lack of a police station at the post-cabinet meeting and speak to the Home Ministry about it.

The business owners were also disheartened with the rubbish collection in the area as well as the lack of public transportation.

“The roads along Jalan 27/70A is very narrow and people double park all the time so the rubbish trucks cannot enter to take the garbage,” Fernandez said.

He also said that since no public transportation was available in the area, it was difficult for the businesses to hire workers.

Saravanan assured them that the DBKL would study the road system and request the Transport Ministry to help ease the traffic congestion.

“I will also ask Alam Flora to meet up with all of the tenants so that they can share their views and suggestions with the company to ensure that cleanliness is maintained,” he said.