KUANTAN: The East Coast Economic Region (ECER) development masterplan which involves the states of Pahang, Terengganu, Kelantan and parts of Johor (Mersing) will transform Pahang into a rapidly-developing region when the projects take off.

Mentri Besar Datuk Seri Adnan Yaakob said more local and foreign investments were expected to come in, which augured well for the development of Pahang and the other east coast states. 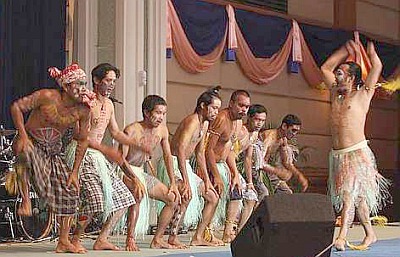 Showing appreciation: Polyplastics staff performing an aboriginal dance during the dinner in Kuantanrecently.

Adnan said that vast developments in the state would take shape with support from the Government, which practised a pro-business approach in administration.

He said this practice was combined with a people-friendly and business-friendly philosophy of governing which had proven successful.

“From January to July this year, the Malaysian Industrial Development Authority approved 17 projects with investment value of RM700mil,” Adnan said in his speech during an investor appreciation dinner at the Sultan Ahmad Shah silver jubilee hall here recently.

The text of his speech was read by the state exco member in charge of the Agriculture, Agro-based Industries and Felda Affairs Committee, Datuk Mohd Tan Aminuddin Ishak.

Adnan said the corporation had converted 3,200ha into industrial areas offering good infrastructure to investors in the state.

“There are complaints on the quality of the infrastructure, however, we pledged to continuously upgrade facilities such as uninterrupted supply of water and electricity,” he said.

Adnan said the state would not rest on its laurels despite its achievements in the industrial sector.

“There is much to be done and we will continue to ensure Pahang remains a haven for investors, both local and foreign,” he said.

He said the state recently approved 418.77ha in Gambang to be developed into a techno park embodied by Bio-Technology Park (Pahang Science Park) and Pahang Cyber Park.

Adnan said that adjacent to the parks was 14.2ha for development into the Pahang Halal Complex.

During the dinner, 11 companies staged performances in a competition to show their support and appreciation for the state.