Fong Wei, a Pre-University student, was adjudged the winner ahead of diver Cheong Jun Hoong and taekwondo exponent Nurul Asfahlina Mohamed Johari, It was the second time Fong Wei, who hails from Malacca was presented the award. Her first was 2006.

Besides getting excellent results in her studies, Fong Wei was also impressive in local and international competitions this year.

In the Sukma in Kuala Terengganu, Fong Wei won the gold medal in the Chang Quan event while she was a bronze medallist in the Dao Shu event in the World Wushu championships in China and Asian Wushu Championships in Macau. 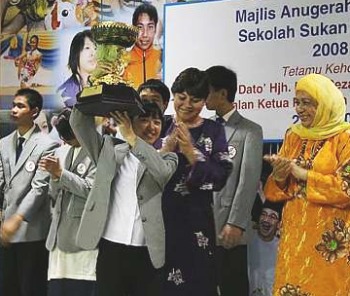 Well done: Fong Wei holding up her trophy after receiving the All Round Student award from Noor Rezan (right). Looking on is BJSS principal Marina Chin (in purple baju kurung).

Fong Wei also won bronze medals in the Dao Shu and Gun Shu events in the Beijing Wushu championships during the Olympics. 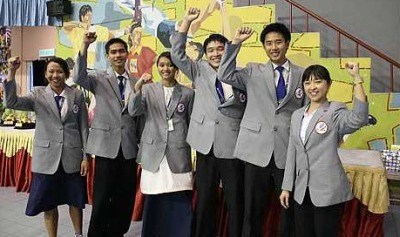 Education Ministry deputy director-general (general education operations) Datuk Noor Rezan Bapoo Hashim, who presented the awards to the winners, commended the students for excelling in both studies and sports.

“But I would like to remind the students to always respect the elders. The Ministry is also proud of the success achieved by students from not only the BJSS but also from the Bandar Penawar Sports School (BPSS). We hope more students from these schools will excel in sports and studies,’’ said Noor Rezan.