DOGS get their day out while owners learn what responsible dog ownership is all about at this year’s Malaysia Responsible Dog Ownership Day 2008, held again at the Central Park, Bandar Utama.

The annual doggie event is organised by Internet community portal Puppy.com.my, with the aim of promoting responsible dog ownership in Malaysia, and sponsored by Purina Petcare (Malaysia) Sdn Bhd.

Owners came from near and far to socialise and in this case, for their dogs to have fun. 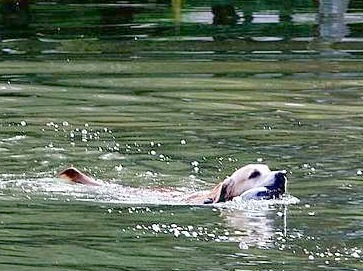 Splash time: A dog takes a cool dip in the lake.

Many of the dogs came well-groomed with their fur immaculately brushed. Some even had their coat or tail coloured, and like any pampered children, they were carried around and fanned by their owners as a respite from the morning heat!

One or two canines were spotted taking their own cool dip in the lake!

And they could not wait to be part of the activities, which included games like hurdle race, fastest recall, tail wagging contest, and doggie musical chairs. A total of eight doggie games were created. As they waited eagerly in line for their ‘get-set, go’ signal, owners were equally eager prepping their dogs up for each game for a shot at the hamper prizes.

It was amusing to watch how the owners would clap louder as their dogs neared the finishing line.

But that was not all. The day was filled with various highlights like a responsible dog ownership drive, dog microchipping campaign, a demonstration by the Police K9 unit, dog agility performance by Puppy.com.my students, and also a demonstration by the Fire Department on a search and rescue effort with their well-trained dogs. Puppy.com.my founder Khoo Boo Gee said the event in Malaysia was first started in 2003 in conjunction with the Responsible Dog Ownership Day in the United States and has been an annual one since.

“Promoting responsible dog ownership means we tell them about picking up dog poo, and also training their dogs,” said Khoo.

“We also promote to owners the importance of microchipping service for dogs.

“Microchipping helps you to identify your lost dog even three years down the line.”

Cousins Low Phei Fang and Low Pui See travelled from Gombak with their two brown poodles to simply have fun. “It’s our second time at this event. This is a fun way for us to spend time out with them away from home,” they said.

Also attracting attention was the nine Shih-Tzus that were brought in by the Lee sisters, who attend the event every year.

One of the sisters Lee Sook Yee said her siblings had started off buying the Shih-Tzus. After a while, they gave birth, and the owners did not want to give away the babies so they ended up having nine now.

“Although we stay in Pandan Indah, we still take our dogs here for a walk every week, since this is a private place that still allows us to do so,” said Lee.

Dog owner Rennie Khoo, who owns two Weinmaramers, was seen holding on to the reins of his well-built male dog.

While the male, Rustie, is accustomed to outings and external environment, Fina the female is a little edgy as it was her first outing in the presence of strangers and in a new surrounding.

“One is locally bred and the other is from Germany,” said Khoo who hails from Nilai.

“I fell in love with Weinmaramers when I first saw them in the States. They have eyes that look like humans, and in Malaysia, it’s a rare species.

“They are known as sporting and hunting dogs and are good at retrieving,” he added.

At the event, booths were also set up by SPCA Selangor and PAWS promoting dog adoption. A fund-raising session was also later thrown in for both the organisations.

Dog owners also got to take advantage of the free medical check-up for dogs offered at a vet corner.