No bed of roses for Rajagopal

LIFE has not been a rosy one for National Under-19 football coach K. Rajagopal. He had to face many challenges in his career as a footballer and coach since he started being involved in football as a student.

His biggest challenge came when he was unceremoniously dropped as the Selangor coach after the 2000 season.

It was more painful as the former international had steered the Red Giants to the Premier I league title in the M-League. Under Rajagopal, Selangor also qualified for the semi-finals of the Malaysia Cup and were quarter-finalists in the FA Cup competition. 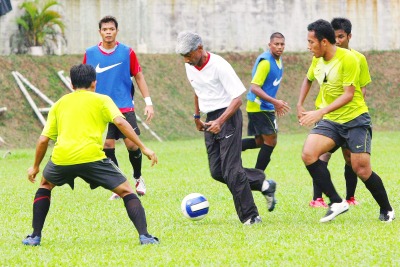 Hands-on: Rajagopal (centre) joining in the training session with the Young Tigers.

“I was quite disappointed but took it as a challenge and wanted to prove myself,’’ said Rajagopal.

And to pursue his coaching career, Rajagopal quit his job as a technician in PKNS and signed up with Kelantan.

“It was a tough and also a risky decision as I had been with PKNS for about 22 years. I have to thank PKNS general manager Datuk Harun Salim for his guidance during that time. Datuk Harun has played a big part in my football career,’’ said Rajagopal.

Being a disciplined and hardworking person, Rajagopal made his presence felt in Kota Baru and won over the Kelantan players as well as the local crowd.

Kelantan finished an impressive third in the Premier League and also qualified for the Malaysia Cup semi-finals.

The Football Association of Malaysia (FAM) were impressed with Rajagopal and engaged him to take charge of the National Under-21 team in 2003.

Since then he has been in the FAM but given other responsibilities as well.

In 2004, Rajagopal led the National Under-21 team to the quarter-finals in the Asian Football Confederation (AFC) championship. The effort was commendable as Malaysia made it to the quarter-finals after 30 long years. He was also the caretaker coach for the national squad for the FIFA World Cup qualifiers.

Currently, he is with the national under-19 squad. And his mission is to guide the players as well as groom them for the senior squad.

Rajagopal has come a long way since he took up football as a schoolboy. As a student of Setapak High School, Rajagopal had represented his school in various age group competitions.

His first club was Cholan Youth, which was involved in the Selangor Football League in 1975. After three seasons, he was employed by PKNS and played for them until 1995.

While with PKNS, it was a another challenge as he had calibre players like the legendary Mokhtar Dahari, R. Arumugam, Santokh Singh and Soh Chin Aun as his team-mates.

“I will always cherish the times I had with them. I was just a rookie and they made me feel at home and encouraged me. I had the opportunity to play along side Mokhtar as a striker for PKNS as well as Selangor,’’ said Rajagopal.

His football career flourished when he was with PKNS. Soon he was picked for Selangor and eventually Malaysia.

What was his most memorable moments as a player and coach?

“The 1980 Malaysia Cup final. We were up against Singapore. They had a star-studded side and we beat them 4-0. No one, at that time, could have dreamed of the result. It was a great match and we enjoyed ourselves.

“As a coach, I would remember the award by the AFC. In 2000, I was named as the AFC Coach for the month of August. It was a recognition to the challenges I had gone through in my football career,’’ said Rajagopal.