THE residents of Medan Damansara want the Anti-Corruption Agency (ACA) to investigate the Damansara 21 development project.

The residents announced this yesterday, after a retaining wall collapsed on Wednesday evening during a downpour, followed by a landslip at 4am yesterday due to soil erosion from the hill near the their area.

One house was badly affected by the incident with cracks appearing on the walls and mud gushing through the kitchen door.

Two families have been evacuated as a precautionary measure. 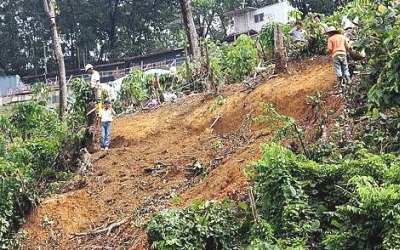 According to the Medan Damansara Residents Association committee member Randhir Singh, they want to know if proper procedures were followed with the regards to the project.

“We had foreseen this incident but our cries fell on the deaf ears of the Kuala Lumpur City Hall (DBKL),” he said.

“The family affected by the incident is traumatised and had to leave the home because it was no longer safe,” Randhir said.

“A fire department official told them that it was going to get worse and it did, when the soil erosion happened.

“The officer had also asked the next door neighbour to move out,” he said.

“The project is neither residential nor environment-friendly. The DBKL, however, seems to be developer-friendly,” he said.

Randhir said the project should be scrapped and the hill restabilised.

Dr Patricia Ambrose, whose family has been asked to move out, said she was fed up with the whole issue. 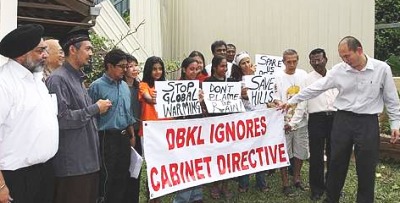 Investigations please: Lim (right) with the Medan Damansara residents at the affected house.

“The developer assured us that nothing would happen but it did. They said that it was safe but it is not.

“So, we have to stay away from our home,” she said.

“I think another downpour will cause the whole hill to collapse.” Patricia said.

Deputy Federal Territorries Minister Datuk M. Saravanan, who visited the site recently, said the ministry was concerned over the issue.

He said the ministry had issued a stop-work order to the developer in November last year after the residents complained about the risk. 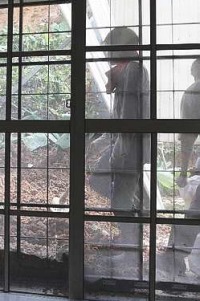 Scary sight: Workers can be seen clearing the eroded soil through the windows of the affected house.

“The developer was not given the approval to start development. Its workers were only clearing the place but even that proved dangerous,” he said.

Saravanan said if all the legal documents were intact, it would be difficult to stop the project because it was on private property.

“However, if the developers failed to provide the necessary documents, we will issue the stop-work order,” he said.

Asked about the residents’ intention to take the matter to the ACA, Saravanan urged the residents to do so if they thought they had a case.

“The ministry and the DBKL do not have any vested interest in the development project but if the residents have proof of corruption, then they should definitely lodge a report,” he said.