Grand party for King of Morocco

THE Embassy of Morocco hosted a grand party at Mutiara Crowne Plaza on July 31 to celebrate the 9th anniversary of the enthronement of King Mohammad VI.

Born in 1963, the youthful king was crown prince till he ascended the throne on July 30 1999, a week after his father King Hassan II died. 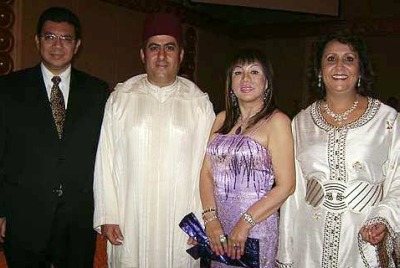 King Mohammad VI is the 18th king of the Alaouite Dynasty which has ruled Morocco since 1666. He also carries the title Amir Al-Muminin or Commander of the Faithful.

He was awarded the Doctorate in Law by the University of Sophia Antipolis in southern France for his thesis on EEC and Maghreb relationship.

He is married to Princess Lalla Salma and have two children, Moulay Hassan and Lalla Khadija. The king is widely acclaimed for modernising Morocco by enhancing human rights and giving women more power with his Mudawana family code in 2004.

Ambassadors and diplomats came by the droves to toast to the health of the Moroccan king. Portraits of the Moroccan king and the Yang di-Pertuan Agong were placed on stage as both deputy minister and ambassador made short speeches.

A vast array of Moroccan delicacies were dished out by chefs flown in for the occasion.