Safe walkway for the blind

THE hazards plaguing the visually impaired at St Nicholas Home are now a thing of the past with a 500m-long safety walkway completed last year.

The home’s managing director Ooi Chee Khoon said there had been no accidents since the Rotary Sunshine Path was built by Rotary Club of Georgetown for the home.

“Before the walkway was built, we did not encourage our residents to walk to the shopping complex to shop for groceries as it would be risky for them,” he said. Yusoff (front) said the residents could walk more confidently now with the path to nearby bus stops and shopping complex to buy groceries.

Resident Yusoff Abdul Rahman, who is also the massage instructor at the home, gave the thumbs up for the walkway and said he and the other residents now felt more confident to walk outside the home compound.

The walkway was built using imported Braille tile walking blocks with embossed circles and lines to indicate when the inmates should stop or carry on walking.

Massage student Mona Ahmad said there were occasions in the past where she had accidentally fallen into the drains. 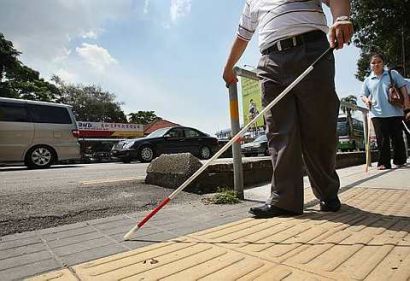 The specially imported braille blocks that enabled the visually impaired to know when to stop at a junction and to keep walking.

“Many of us fell into the uncovered drains but thank God no one was seriously injured. There were times when some of us had walked onto the busy road because there were a lot of obstacles before the path was built,” she said.

Training and social services manager Wong Yoon Loong said he was surprised that the handrails and walkway were not vandalised.

“I thought the steel rails would be gone within three months but I’m thankful to the public for not vandalising them as the walkway is essential for our residents,” he said.

Bhutanese trainee Leki Chedup said it was a new experience for him as there was no such facility like the path in his country.

The RM200,000 walkway project was a gift from Rotary Club of Georgetown to the home in conjunction with the home’s 80th anniversary.