Traders not in favour of big bins

TRADERS in the Segambut constituency area were taken by surprise recently when they were asked to buy garbage bins for their premises by Kuala Lumpur City Hall (DBKL).

In a letter issued to traders in Taman City Timur, Taman Sri Kuching and Jalan Kuching, DBKL on July 9 stated that the traders are required to have a 240-litre bin within two weeks from the day the noticed was issued.

However, so far none of the traders have bought the bins as they found the notice unreasonable. 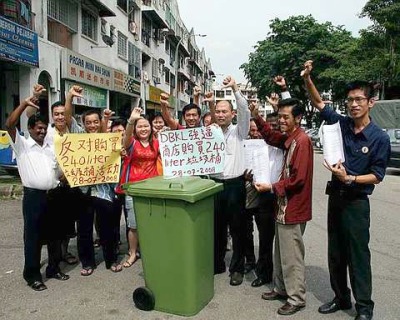 Not happy: Lim (third from right) with some of the traders.

“We clean our premises daily without the help of DBKL or Alam Flora, and we tie up our rubbish bags and have to walk a distance to dump it in the large open bins.

“Now they want us to buy these two-wheeled bins which I don’t need at all,” said S. Thirukumar, 43.

Thirukumar, who owns a car workshop in Taman City, added that he only had a bag of rubbish daily and it would be stupid to buy such a big bin.

“The residents living above our shop will probably be using our garbage bins instead as they are not required to own any,” said Thirukumar.

Another trader, who owns a hardware store in the area, said the bins were available at his outlet and are priced at RM260 each.

“I could have supported the call as I sell such bins in my shop but I am not doing so.

“It is an unreasonable idea from DBKL. Even my daily rubbish is not able to fill my four-litre bin, what more if its 240 litres,” said Yap Hock Guan, 33.

Other traders like restaurant operator Ooi Teoy Bee fear that their large bins would be stolen in no time if it is left outside their premises.

“It is an expensive item and can easily be stolen if we do not keep it in our shop or lock it outside,” said Ooi.

The 50-year-old also questioned the efficiency of Alam Flora in clearing their rubbish weekly.

At present, the traders pack and leave their rubbish at limited mobile garbage bins placed in the neighbourhood.

“We want to know if by buying the bins we will still need to carry our rubbish to the open bins or if it will be collected from our premises,” said Ooi.

Segambut MP Lim Lip Eng, who was present at the protest, said he had written to DBKL for an extension of another two months to reconsider the ruling as he felt it was inappropriate,

“The area is clean and the traders did not dirty the neighbourhood, hence I don’t understand why they are asked to buy such big bins when they all own proper rubbish bins already,” said Lim.