A total RM1.062mil was raised from the Naza TTDI 2008 Charity golf tournament held at the Saujana Golf and Country Club recently.

The event, held for the sixth consecutive year, brought the total collection since its inception in 2003 to over RM3.2mil. 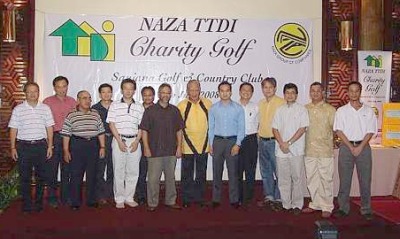 The beneficiaries of the fund included orphanages and children’s welfare homes, hospital and disease foundations, single mothers, the handicapped and other non-governmental organisations.

Johan hoped that the contributions would help meet a portion of the funding needs of these noble causes.

Johan said in the past TTDI did charitable work on a need basis.

“However, we would now like to harness the synergies within our organisation and business partners to support welfare bodies more effectively. In this respect, we will work with like-minded people who share our passion for giving back to the community,” he said.

TTDI had an annual budget for the golf tournament and had increased it to RM250,000 this year. The amount is used to defray all the tournament’s expenses while all the donations are given to charity.

“The golf tournament has become so popular over the years that we have to turn away many participants as our prizes are attractive. We have people donating as much as RM125,000,” he added.

A total of 124 golfers took part in the event grace by the Governor of Malacca, Tun Mohd Khalil Yaakob. Also present was the Singapore High Commissioner T. Jasudesan.