THE spectacular Water Sports Complex at Precinct 6, Putrajaya, will be the venue for the fifth leg of the International Water Ski Federation (IWSF) Waterski and Wakeboard World Cup series from Nov 7 to 9.

The event will be held in Malaysia after Dubna (Russia), Hacienda Bay Beach (Egypt), Singapore and Chandigargh (India). The last venue will be Doha (Qatar).

IWSF president Kuno Ritschard, who was in Malaysia to advise on the building of a jump ramp that will feature prominently in the Waterski World Cup, said the locations were the most exotic thus far in the World Cup history.

“Putrajaya can become one of the best venues in the history of the IWSF World Cup series. The facilities and setting are second to none,” he said after a familiarisation tour of the complex.

Ritschard’s responsibility include administration of day-to-day business and the worldwide promotion and marketing of Waterskiing and Wakeboarding World Cup series. 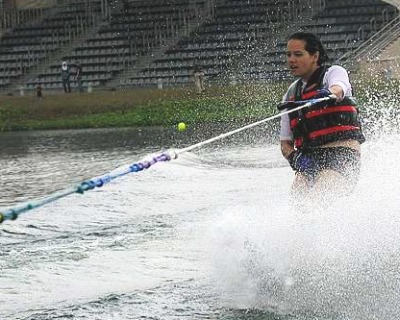 Smooth moves: Philippa Yoong demonstrating her prowess at the Slalom during the event.

“The sport is gaining momentum. Our aim is to increase the series from the present six to 10 venues a year,” he said.

Putrajaya Corporation president Tan Sri Samsudin Osman said some of the world’s top ranked men and women competitors would take part in disciplines like the Slalom, Shortboard and Jump for the very first time in this country.

In each of the three disciplines, eight of the world’s highest ranked women skiers will take part as will 12 of the current top ranked men athletes.

“About 60 of the world’s best water ski competitors from 18 countries are expected to perform.

“There are no local competitors but we hope there will be someone within the next four years,” he said after launching the Waterski World Cup logo.

“This is in line with the original objectives of the World Cup series that is to bring the best IWSF athletes to compete,” Samsudin said.

He said while water sports enthusiasts awaited the World Cup series in November, Putrajaya Corporation would ensure that the Maritime Centre and the Pullman Alam Warisan hotel would be ready and operational by September.

“We are expecting about 100,000 visitors from all over the country for the three-day event,” Samsudin added.