Bringing art to the masses

WHEN Mohd Sarip Abd Rahman told his father that he wanted to be an artist, his father was unenthusiastic.

The eldest of seven siblings from Tawau, Sabah, was told that it was not a good idea and reminded that he had to show a good example to his siblings and become “someone who is more respectable”. 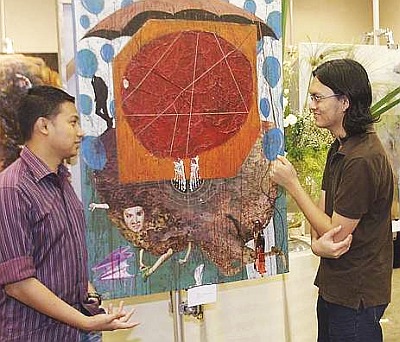 “But I just could not do anything else – the only thing I knew was art.

“In the end, my father realised that this was what I was good at and gave me his blessing,” said the 27-year-old, who is also teaching art at UiTm Perak.

Mohd Sarip, however, is grateful to his father for instilling in him the determination and will to fight for what he wanted.

He said despite his father’s initial disapproval, he continued to draw and do his artwork.

“My father used to scold me and even rap my fingers with a ruler because I used to draw during other classes in school. 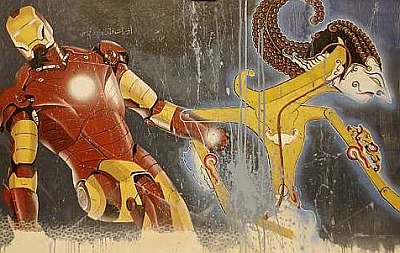 Western vs Eastern superheroes: Mohd Sarip is inspired by thesuperheroes he watched on television as a lad.

Mohd Sarip drew inspiration from the superheroes he watched on television. But, he cautioned that although such heroes could inspire children to help others, the youngsters could also get carried away trying to imitate their superhero.

He recalled that when he was young, he almost fell off the stairs because he wanted to fly like Superman.

“We all have our superhero whom we idolised when we were young and some people tend to get carried away.

“In my artwork, I have combined the Western concept of superhero and the Eastern ones like the heroes in wayang kulit,” he said, adding that he had been working on the subject since 2004.

His latest works are among those on display at Parkson, Pavilion Kuala Lumpur.

About 150 art pieces, mostly by budding local artists, are on display in various locations on the three floors of the outlet.

The works are being displayed at the outlet in an effort to bring the artworks closer to the public.

The pieces, which are for sale, will be changed every three months.

The artworks were previously exhibited at Kebun Mimpi Gallery in Bangsar, Kuala Lumpur.

Another artist whose works are on display is Haslin Ismail.

Three of his latest collection of works, which were done earlier this year, are being featured. All the pieces were part of the illustrations for the graphic novel on which he is working.

The mixed media pieces feature characters in his novel.

“It is easier for me to put the story in a painting first and then put it in words,” he explained.