Free Euro supplements with The Star

THROUGHOUT the duration of the UEFA Euro 2008, about 100 copies of The Star Euro supplement will be made available at selected 7-Eleven outlets nationwide.

In the Klang Valley alone, about 498 outlets are in partnership with The Star.

“We are increasing the number of outlets to 1,000 by the end of the year and hopefully there would be more outlets by the next Euro. 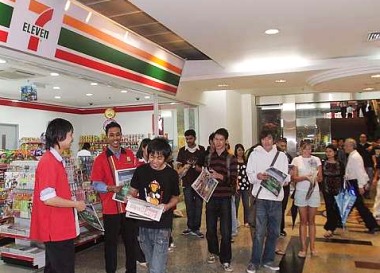 “This would further strengthen our partnership should there be one then,'' said 7-Eleven Malaysia Sdn Bhd executive director Ng Su Onn.

Ng said the company's strategy was to continue with their aggressive store growth and to maintain their dominance as the largest convenience chain store in Malaysia.

So far, 7-Eleven has 918 stores nationwide and on the international front, the company is looking at Indonesia, Vietnam and to further expand into other parts of China.

“China is a huge market and the middle region is not explored. India will be next in 2009,'' added Ng.

On another matter, Ng added that the company would be launching the Slurpee loyalty card next month.

The loyalty card enables customers to a free Slurpee after the sixth purchase.