There are two makan places around Jalan Tun H.S. Lee that I have frequented through the years and – well, speaking of endurance – these are established eateries that have existed for at least half a century.

For starters, the road mentioned is located in the city centre and is a nightmare for motorists as buses are haphazardly parked and motorcyclists move in a zig–zag manner to beat traffic.

And, to make things worse, most of the nation’s banks are also found here. Parking is a hassle, so the best thing to do if you want to eat here is to use public transport. Okay, with the traffic report covered, let me start with my choice picks for good makan here. I have only two and the first eatery is the Soong Kee beef ball noodles shop.

This is the place to go if you are a meat lover. Beef is the speciality here and the shop has been in business since the mid-1950s.

My buddy’s parents dated here when they were in their late teens and when it came to my turn at playing the dating game, I, too, brought some of my girlfriends here, including my mem besar-to-be (wife).

Back in the 80s, there used to be an upper-level dining area but that is gone now. And, the beef ball noodles, which I cheekily called ngau por meen (“bull’s balls noodles” in Cantonese) was a hit and the presence of a kumcheh suey lou (sugarcane drink man) here made the dining experience a memorable affair. Not only was the food cheap, it was also good. My favourite was the mar meen ngou chap (double-portion noodles with beef offal) blasted with Soong Kee’s trademark yuk suoi (minced meat sauce).

Now, speaking of minced meat, I want to clarify that the ingredient used in the gravy is not beef, but pork. A Malay friend of mine had actually asked: “Eh, Sam, Soong Kee punya ‘ngau por meen’ sedap kah?” (Soong Kee’s beef ball noodles tasty, ah?).

After clarifying the facts, he shook his head and told me that he would stick to mee bakso. A bowl of beef noodles here costs RM4.50 for the small portion.

If you are a big eater like me, ask for: Hampalang tou fong! (Dump everything in). Uric acid and high cholesterol aside, I highly recommend the ngau chap (beef offal) with extra meatballs. The large no-holds-barred serving here can chalk up to RM8.50 a bowl but I must say that it is a satisfying meal, indeed.

What I like about eating here is that people would leave me alone and mind their own business.

No questions on my nationality or whether I am a North Korean, Mongolian, an Uigur tribesman who strayed from his camel caravan or a Japanese tourist who refused to follow his guidebook.

Soong Kee opens as early as 8am in the morning and runs all through the night. It is also a favourite haunt for office workers and hardcore beef ball noodle lovers from all over the Klang Valley. In a nutshell, it is a place that needs no introduction.

Moving on, there is another makan place in this neighbourhood that made its name from sar hor fun (flat rice noodles).

And, through the years, they have maintained a high standard and a decent price. Just a couple of doors away, opposite Maybank, you will find Lee Tong Kee sar hor fun shop.

This place was founded by its namesake back in 1948 at Jalan Sultan and specialises in serving prawn and chicken hor fun.

During my schooldays, I had at least two or three lunch sessions at the shop that relocated to Jalan Tun H.S. Lee eight years ago. 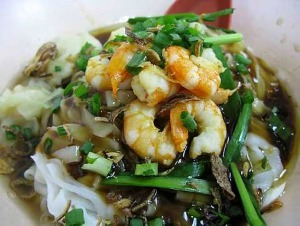 Nobody does it better: Kwon-loh (dry gravy) sar hor fun at LeeTong Kee.

The shop was taken over by Jade Lee, the daughter of its late owner who passed away in the 70s.

Later, when I started working as a reporter in Jalan Riong, my ex-colleague C.M. Khor brought me to the eatery for some serious sar hor fun sessions.

Jade, who is friendly and proficient in English, said the shop catered only for the breakfast and lunch crowd.

She has a steady stream of customers from the business district as well as some regulars who used to patronise the shop at its previous location at Jalan Sultan.

“We moved here back in the year 2000 because the rental at the old shop was unbearable,” she said, adding that her uncle, who used to assist her father, had opened a sar hor fun shop in a town up North.

For an eatery that is located in the heart of the city, I must say the pricing here is absolutely affordable compared to many kopitiam that you find in shopping malls.

Lee Tong Kee’s chicken and prawn wantan hor fun is a noodle dish that came highly recommended. You can have it either kwon loh (dry gravy) or chee suay (soup) and a bowl costs only RM4.50. A legacy business: The Lee family, whose patriarch’s namesake isfronted by this signboard, has been in the food business for morethan half a century.

The mother of all hor fun here is the mushroom and chicken, priced at RM8.50. Besides noodles, the shop also serves chicken rice.

In short, you will never run out of choices. While having my late breakfast here, I also noticed an Indian lady here who spoke fluent Cantonese.

Jade explained to me that she had been working at the shop for more than two decades.

I was simply amazed by the speed and efficiency of her workers who seemed to be enjoying what they did – a rare sight in the corporate world.

To get to Jalan Tun H.S. Lee, take bus number 12 or 99 to the Bangkok Bank halt or the Rapid KL LRT from Petaling Jaya to the Pasar Seni station. It takes about five minutes to get there on foot.