SAMUEL Omoh Junior, 21, is not a fan of rigid rules on traditional basketball courts, which is why he is drawn to the freestyle elements of streetball (street basketball).

“I didn’t enjoy basketball until I saw the seniors in my high school in Ghana playing streetball.

“Streetball is more interesting and less restrictive,” said the University College Sedaya International management student, who picked up streetball when he was 17. 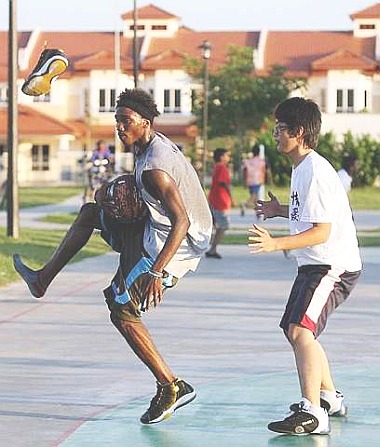 Omoh Jr has been playing with his college friends and guys from his neighbourhood in Taman Connaught for the past year, and was crowned the AND1 In Search of Freestylist champion last year.

“Basketball is a great way for me to make new friends and serves as an ice-breaker,” he said, admitting that he has become more recognisable and made more friends and fans after his win.

Omoh Jr and Billy Chen, a 20-year-old HELP University College student, were two AND1 Streetball players who were making their rounds during several pick-up games in Klang.

Ossia World of Golf (M) Sdn Bhd will be having a series of pick-up games and coaching clinics that will lead up to the AND1 Streetball Challenge on June 29 at AEON (Jusco) Shopping Mall in Bukit Tinggi, Klang.

“The pick-up game’s concept is similar to the AND1 Mix Tape Tour in the United States, where we have two-on-two or three-on-three on-the-spot games at ball parks in residential areas,” said Ossia World of Golf sales executive Moo Kok Hsiung. 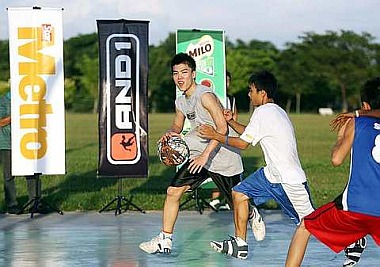 “We’re also distributing entry forms for the challenge and encouraging students to get their schools to sign up for the coaching clinics.

“The coaching clinics are targeted at secondary and primary schools in the Klang Valley. We’ll have coaches, comprising former and current national players, to teach students the fundamental skills of basketball like dribbling, shooting and defence,” he said.

Eddie Lee, 17, was one of the students who planned to get his school to have the coaching clinic soon.

“I took part in the AND1 Streetball Challenge last year, and I hope to sign up for it again this year, depending on time constraints,” said the SMK La Salle, Klang Form Five student.

The Bandar Botanic resident plays basketball with his neighbourhood friends once a week and enjoyed his pick-up game with Omoh Jr.

Lee said he had represented his school at inter-school basketball games and named Boston Celtics' Ray Allen and LA Lakers' Kobe Bryant as his favourite players.

The streetball challenge is divided into six age categories – four for boys and two for girls.

Other activities lined up include competitions for freestyle, emcee, beatbox, breakdance, creative innovation drawing and graffiti, slam dunk demonstrations, interactive games, as well as lucky draws with AND1 products up for grabs.

The entry fee for each team is RM90.

Each participant will receive an AND1 jersey and each team will get an AND1 basketball.