IT WAS “love at first sight” with The Naughty Boy as many cat lovers found out at the Pesta Meow.

The Naughty Boy – a four-year-old local mixed breed- was the star attraction though it was not among the some 80 cats competing for honours in the two-day event. 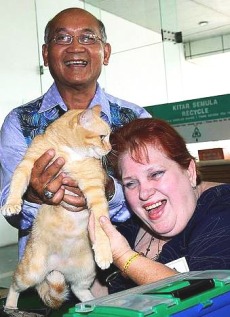 The brownish big cat, which weighs more than 8kg, stood out in one of the cages put up by the Sarawak Society for the Prevention of Cruelty to Animals (SSPCA).

A no-adoption tag was placed on the Naughty Boy’s cage but some 20 other cats and kittens in other cages were up for adoption.

SSPCA volunteer Elizabeth Lim said the Naughty Boy, which was its icon, was one of the three stray kittens picked up along Jalan Pending.

It was then taken to the SSPCA animal shelter at Penrissen Road, and groomed into a model cat.

“We want to show the public that a stray, given the care and love, could be transformed into a beautiful pet,” said Lim in an interview.

Lim’s husband Francis Lim, who is the SSPCA animal shelter manager, likened the Naughty Boy’s transformation as an “ugly duckling into a swan.”

Elizabeth said the well-liked Naughty Boy would make loud noises and open wide its mouth for food whenever it gets hungry.

She said most of the stray cats and dogs at the shelter, which were brought in by local authorities’ workers, were put up for public adoption after they were groomed.

“To adopt a cat, one has to join the SSPCA as a member, pay an adoption fee of RM25 and neutering fee of RM20.

“The other condition is that one has to provide an ideal place at home to keep the adopted cat,” she added.