MYANMAR student Thu Rein was back home when Cyclone Nargis struck on May 2.

“At about 10.30pm, I heard the loud noises from the strong winds blowing outside. Some of us at home just stayed inside, too afraid to go out,” said the 27-year-old INTI International University College (INTI-UC) computer networking student. 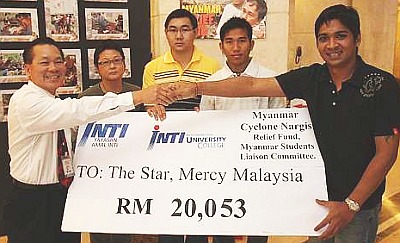 Right on time: Linn (right) handing over the donation to Foo (left). With them are (from left) Sia,Thu Rein and Minnbo.

He described the aftermath as something out of a horror movie.

“Every tree was uprooted and most of the electrical and communication towers were down,” he said.

Meanwhile, in Malaysia, computer science student Minnbo, 25, tried for five days to contact his family in Myanmar but there was a communication breakdown.

“They finally managed to get in touch with me and I'm glad that all my family members are safe,” said Minnbo.

As soon as he landed in Kuala Lumpur, Thu Rein called for the INTI-UC Myanmar Student Liason Committee to have an emergency meeting to collect funds for the victims.

“Many people went out of their way to contribute. Within seven days, we had collected a total of RM20,053,” he said.

On hand to accept the mock cheque was The Star Education Fund manager Richard Foo.

Sia said they would continue to collect funds for the cyclone victims, as well as the Sichuan earthquake victims.