BUTTERWORTH: Shop houses along Jalan Chain Ferry here were once again inundated in knee-deep water, when the tide rose to an all-time 3m high.

Besides badly affecting their businesses, the two-hour long flood, from 1pm to 2pm, caused a lunchtime traffic snarl along the busy stretch yesterday.

On Monday, the same area was hit by flash flood between noon and 2pm, when the tide rose to an exceptional 2.9m high.

Seberang Prai Municipal Council president Farizan Darus said low-lying areas in Seberang Prai might experience a similar flooding today between 2pm and 3pm as the tide would rise up to 3m again. 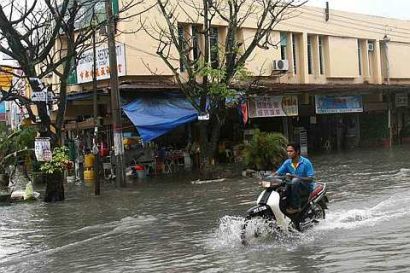 Farizan said the council, with the help of UEM Builders Berhad which is currently undertaking widening works on the Penang Bridge, built a temporary bund from the bridge-end in Prai to the council’s pumphouse at the Prai Industrial area Phase I yester- day to minimise the impact.

He said concrete debris from the bridge’s old railings, which were recently hacked, were used, together with some rocks and red earth, to build the bund.

“This measure is taken to prevent the water from flooding the factories in the industrial area, although the compounds of some factories are already submerged,” he said.

State Flood Mitigation Committee chairman Law Choo Kiang said he had directed the DID and the council to find out the root cause of the problem because many areas in Prai were often hit by flash floods whenever the tide was high.

“We understand the recent flash floods in Butterworth were caused by an unusual tide.

“But, apart from initiating temporary measures, we have to look for a long-term solution to stop the problem from recurring,” he said.