AMID the celebration of the birth, enlightenment and the passing away of Gautama Buddha on Wesak Day, one can also catch some Buddhist-themed movies at the Wesak International Film Festival (WIFF 2008).

Co-organised by 18 Buddhist associations in Klang Valley, there will be a free screening of 12 films on June 14, 15, 21 and 22 at the Malaysia Tourism Centre in Kuala Lumpur.

Organising chairman Yeap Geim Hwa said the main objective of this festival was to create greater awareness of Buddhism among the general public through the medium of films. 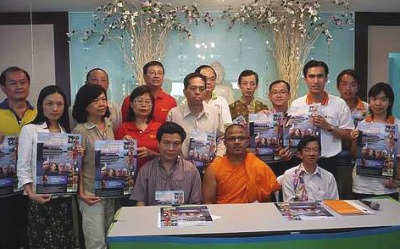 “Besides, this also fosters the brotherhood and sisterhood and strengthens the spirit of unity among every Buddhist organisation,” he said.

The films in Chinese, Thai, English, Korean and Bhutan comprise full-length movies, documentaries and animations such as Qi Xia Temple 1937, Angulimala, Ten Questions for the Dalai Lama, Peace is Every Step, Buddha's Lost Children and Milarepa.

Others include Lion's Roar, Amongst White Clouds, Fearless Mountain, Refuge in the Three Jewels.

Children are not left out in the search for Buddhist culture as well, as Oseam and Eyes of Little Monk will be shown in the festival.

At the opening ceremony, Ravenna Michalsen, a Buddhist singer and songwriter who graduated from Yale University, will be performing songs from her album.

Availability of seats is on a first-come-first-served basis.