Selangor plans to have better record of their whereabouts

THE Selangor Government is looking at introducing an additional assessment charge for residential units housing foreign workers to have a better record on the placement of such workers.

Mentri Besar Tan Sri Khalid Ibrahim said having the additional charges imposed would provide the state government with detailed information on where the foreign workers in the state worked and lived so that it could better plan the future of the state.

“Right now we know that there are over 1.5 million foreign workers in the state but we do not know how many there are in each district or where these people live,” he told a press conference after receiving contributions from state-owned companies for the Selangor Sukma contingent on Wednesday.

“There is no reason why Selangor, which has one the highest number of foreign workers, cannot have a detailed information system when Singapore has been able to do this efficiently,” he said when answering questions on whether the state government would continue with its plans to introduce a levy on foreign workers that would be used to provide training for local youths. 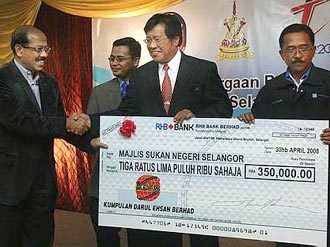 Khalid said the additional charges would also help foreign workers as they would have better living conditions while employers would no longer have to fear that their workers might run away since they were more easily tracked.